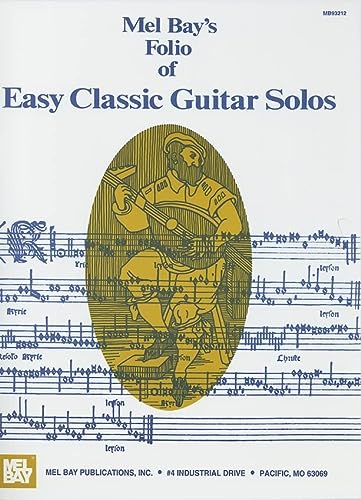 Designed for the beginner, these diverse solos acquaint the student with musical selections by a myriad of great composers. This book is a favorite classic guitar solo collection used by teachers worldwide. Standard notation only.

Mel Bay was born on February 25, 1913 in the little Ozark Mountain town of Bunker, Missouri. He bought a Sears Roebuck guitar at the age of 13 and several months later played his first gig. (He recalled playing until his fingers were raw!) Mel took up the tenor banjo shortly thereafter and continued to play both instruments. During his teenage years Mel played with a wild assortement of bands and characters in rural Missouri. Perhaps no gig was as strange as the job he landed with, in Mel's words, a snake oil salesman. This flamboyant peddler would pull his ostentatious Pierce Arrow automobile, complete with steer horns mounted on the grill, into the center of a small, rural town. Mel would sit on the car and play up a storm on the tenor banjo. After a crowd gathered, the peddler took over and began extolling the merits of his wonder elixer. In 1933 Mel Bay moved to St. Louis and began his professional career. He played with numerous local and traveling bands. In addition, he landed staff guitar jobs on several radio stations. Mel fronted his own trio (piano, bass, guitar) and played steadily for 25 years! He was equally adept on most fretted instruments and played mandolin, uke, Hawaiian guitar, tenor and plectrum banjo professionally. While Mel was actively pursuing his playing career, he continued to teach as many as 100 students a week. He decided to begin writing instructional materials due to the difficulty encountered by guitarists at playing good sounding chord forms in rhythm sections and due to the poor note reading ability prevalent among guitarists. After the war Mel was asked to write instructional materials on guitar for GI's wanting to learn music under the GI Bill. In 1947 Mel formed his own publishing company and wrote his landmark initial book titled The Orchestral Chord System for Guitar. (This book is still in print under the title Rhythm Guitar Chord System and continues to be one the finest rhythm guitar chord texts available!) His Modern Guitar Method was penned shortly thereafter. For years Mel traveled from town to town talking to guitar teachers and players and showing them his publications. At one time Mel claims to have known virtually every guitar teacher in America on a first name basis! The guitar and Mel Bay books caught on in a big way in the 1950's. Things have continued to grow ever since. Mel used to sell D'Angelico guitars. At any given time he would have 5 or 6 lying around the house. Mel played professionally on his New Yorker model but his favorite was the initial Mel Bay Model crafted as a gift for him by John D'Angelico. This famous guitar had all of the main features of the New Yorker but was a cut away model and had a slightly thinner neck. This instrument has been pictured on the Mel Bay Modern Guitar Method for decades. Someone once calculated that sales of guitar books written by Mel Bay have exceeded 25 million copies. When asked, Mel frequently said that he quit counting long ago. Sales of his Modern Guitar Method have alone surpassed the 7 million mark. It is safe to say that Mel Bay is one of the pivotal figures in the world of guitar music and instruction in this century. Joseph Castle (1913-1992) was born in Bloomington, Illinois. His childhood was spent on a fruit farm near Mackinaw, Illinois. When he was twelve, Joseph was discovered by Russel Harvey, a teacher at Illinois Wesleyan University with whom he studied violin. There were very few guitar teachers at the time Mr. Castle became interested in the guitar, so he was primarily self-taught on that instrument, using the Carcassi text. His interest in both plectrum and fingerstyle guitar started in high school. He played guitar and violin in large bands in Austin, Texas as well as violin in the Austin symphony and small chamber groups. Joseph graduated from the University of Texas in 1953 with a Ba

Shipping: US$ 4.67
From United Kingdom to U.S.A.
Destination, rates & speeds

Book Description Paperback. Condition: New. Paperback. musical selections by a myriad of great composers. Standard notation only. Designed for the beginner, these diverse solos acquaint the student with musical selections by a myr.Shipping may be from our Sydney, NSW warehouse or from our UK or US warehouse, depending on stock availability. 32 pages. 0.170. Seller Inventory # 9780871669148