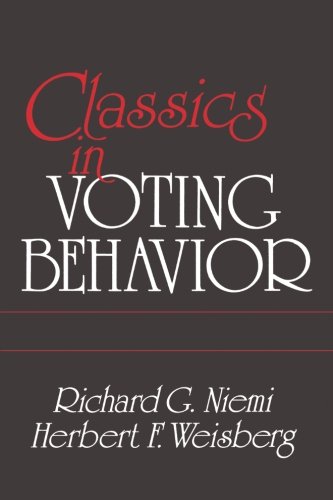 Now back in print, this reader brings together the best work in the study of American voting behavior. It's contents, from the 1950s-mid 1980s, include election turnout, political sophistication, vote determinants, congressional and state elections, party identification, and historical perspectives.

Richard G. Niemi is Don Alonzo Watson Professor of Political Science at the University of Rochester, where he has taught for forty-five years and has served as department chair, associate dean for graduate studies, and interim dean. He earned his PhD from the University of Michigan in 1967. Professor Niemi has been a Guggenheim fellow and a fellow at the Center for Advanced Study in the Behavioral Sciences. He has been a visiting professor at the University of Lund (Sweden) and at the University of Iowa. In 2007–2009 he was president of the American Political Science Association’s Section on State Politics and Policy. He is a foreign member of the Finnish Academy of Science and Letters and a member of the American Academy of Arts and Sciences. He is the author, coauthor, or editor of numerous works on political socialization, civic education, voting behavior, and various aspects of state politics. He has an ongoing interest in the Native Americans of upstate New York and Wisconsin, from whom he can trace a portion of his ancestry.

Book Description CQ Press, 2020. Paperback. Condition: NEW. 9780871876515 This listing is a new book, a title currently in-print which we order directly and immediately from the publisher. Print on Demand title, produced to the highest standard, and there would be a delay in dispatch of around 10 working days. For all enquiries, please contact Herb Tandree Philosophy Books directly - customer service is our primary goal. Seller Inventory # HTANDREE01674441