Items related to Ruth Bader Ginsburg: Fire and Steel on the Supreme...

Ruth Bader Ginsburg: Fire and Steel on the Supreme Court (A People in Focus Book) 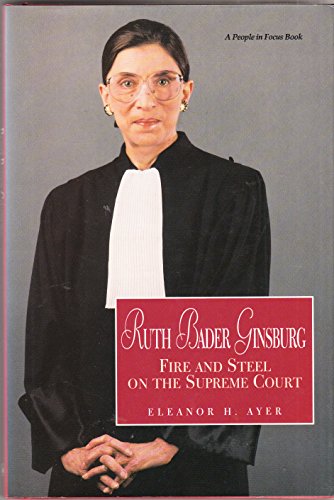 Grade 6-9?This irritatingly adulatory biography makes too much of Ginsburg's unquestionably difficult climb to become the second woman justice of the U.S. Supreme Court. The text is constructed entirely from secondary sources, citing material from several books about female lawyers and the judicial system to establish the social and political background of Ginsburg's nomination, and relying on a great many periodical articles replete with "I knew her when" stories as sources for personal information. The result is a rambling, sometimes repetitive testimonial to the subject as an icon of womanhood. Ironically, Ginsburg the lawyer spent much of her groundbreaking career trying to bring about equal treatment of the sexes by smashing pedestals reserved for women. Average-quality, black-and-white photographs are scattered throughout. Better books about Ginsburg are bound to come along.?Claudia Morrow, Berkeley Public Library, CA
Copyright 1995 Reed Business Information, Inc.

Gr. 5^-8. Ayer's readable biography presents an admirable portrait of the second woman named to the Supreme Court. While focusing on Ginsburg's careers as a student, law professor, activist on gender issues, and jurist, Ayer traces the changes in attitudes toward women in society: Ginsburg was a Phi Beta Kappa, worked on the law reviews of two prestigious universities, and tied for first in her class, but she was passed over for jobs in part because she was a wife and a mother. Ayer also explains how Ginsburg's work for the ACLU's Women's Rights Project led to her appointment to the federal courts and ultimately to the Supreme Court, where her principles and her attention to constitutional law make it difficult to predict how she will vote. Detailed chapter notes, a chronology, and a bibliography are supplied. Chris Sherman

1. Ruth Bader Ginsburg: Fire and Steel on the Supreme Court

2. Ruth Bader Ginsburg: Fire and Steel on the Supreme Court (A People in Focus Book)