Items related to Twachtman in Gloucester: His Last Years, 1900-1902 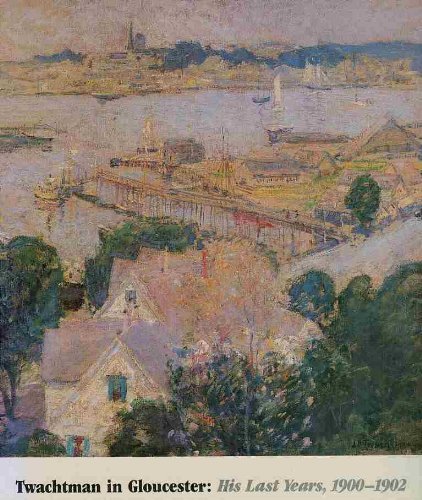 John Henry Twachtman (Fig. 1) was one of the most original and modern artists of the late nineteenth century. Trained in Munich and Paris, and a member of the most advanced American artist groups of his day, Twachtman was at the forefront of the American avant-garde throughout his career. The work of his Greenwich Period, for which he is best known, was influenced by Impressionism and Tonalism, yet Twachtman's stylistic synthesis was unique. Often compared with Claude Monet and James McNeill Whistler, Twachtman developed an experimental technique and explored innovative compositional means to create subtle and poetic images that anticipated directions in twentieth-century abstract painting. In the spring of 1877 Twachtman joined Duveneck and William Merritt Chase in Venice, where he remained for approximately nine months. After returning to America in 1878, Twachtman briefly visited Cincinnati before going to New York. There, in 1878, he participated in the first exhibition of the Society of American Artists, which elected him to membership in 1880. During his time in New York, Twachtman lived in the Benedict building on Washington Square, painted the city's harbors in a bold realist style, and participated in the activities of the Tile Club. Many important contacts were made in Tile Club gatherings including artists J. Alden Weir and R. Swain Gifford. Twachtman returned to Cincinnati in the fall of 1879 to teach at the Women's Art Association, remaining in Cincinnati through the summer of 1880. In October he sailed for Italy. Reaching Florence in the next month, he became a teacher in a school that Duveneck had established there and fraternized with a group of fellow painters, who became known as the Duveneck "boys." These included Otto Bacher, Oliver Dennett Grover, Louis Ritter, Theodore Wendel, and Joseph DeCamp.

1. TWACHTMAN IN GLOUCESTER: HIS LAS

2. TWACHTMAN IN GLOUCESTER: HIS LAS