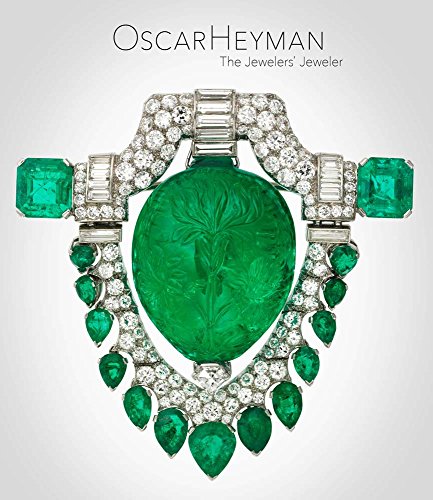 Since its founding in 1912, Oscar Heyman & Brothers has created fabulous jewels for some of the world’s elite houses, causing it to be known in the trade as “the jewelers’ jeweler.” The Heyman Brothers arrived in New York from Eastern Europe in the early 1900s, bringing with them their training in their uncle’s workshop. The company quickly established a name for itself in the industry, working with top houses such as Cartier, Van Cleef & Arpels and Tiffany & Co., producing superbly constructed, beautifully designed pieces with the finest materials. The firm is still family run, and now retails merchandise under its own name, specializing in working with unique and colorful gemstones, cut and polished in their own workshop.

This lavishly illustrated history reveals “the jewelers’ jeweler” to the wider public, following the firm’s growth from its origin as a Russian immigrant family enterprise in New York City to its establishment as an important ally of major retailers throughout the global jewelry trade. Enhanced with dazzling photographs of new and vintage pieces, as well as brilliant, full-color design drawings from the firm’s archives that are works of art in their own right, Oscar Heyman: The Jewelers’ Jeweler reveals Oscar Heyman’s important role in the story of modern American jewelry.

This book will bring the American high jeweler out from the background of the industry and to the jewelry loving general public. (Anthony DeMarco Financial Times)

The book, titled Oscar Heyman: The Jewelers’ Jeweler, is the first illustrated history of the firm, an epic journey through its extensive clientele, a list that includes the likes of Cartier, Tiffany & Co., Harry Winston, Van Cleef & Arpels, Shreve, Crump & Low and Black, Starr & Frost. Enhanced with new photography of vintage and contemporary pieces, as well as design drawings from the firm’s archives that are works of art in their own right, the book reveals Oscar Heyman’s important role in the story of high-style American jewelry. (VO Plus)

The book telling the company’s story is complete with photos of vintage and contemporary pieces as well as design drawings from the Oscar Heyman archives. (Brecken Branstrator National Jeweler)