Items related to The History of Torture

The History of Torture 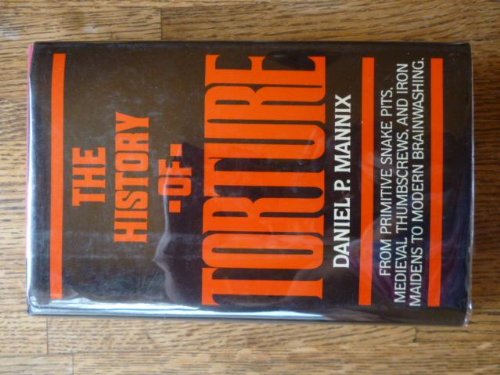 Morality is nothing more than an expression of expediency' a notorious torturer reportedly once replied to objections about his profession. From the primitive snake pit to sophisticated methods of brainwashing, literally thousands of techniques have been devised to distort both the body and the mind - and to satisfy the sadistic needs of those who command, perform and witness human torture. In The History of Torture, Daniel P. Mannix examines with honesty and thoroughness every aspect of torture: the professional torturers, many of them history's most famous men and women; their theories and techniques; the role torture has played in history; and the refinements brought to the practice of torture by individual fanatics, religious groups, the military and entire cultures. The result is information on the infliction of pain for punishment or coercion from pre-history to modern times. This remarkable work discusses not only the history of torture but its moral implications

Daniel P. Mannix (1911-1997) was born in Pennsylvania and after graduating from college he joined a circus working as a sword-swallower, mind-reader, escapologist and lock-picker. A renowned journalist, he wrote some twenty books including Memories of a Sword-swallower, and co-wrote with Malcolm Cowley Black Cargoes, about the African slave trade.

1. The History of Torture