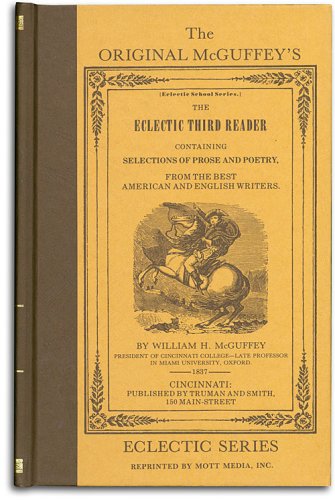 Mott Media has Republished the 1830's Version of the McGuffey Readers with the Original Christian Content! Develops thinking skills and the richer vocabulary of grades six through eight. Contains famous authors such as Addison, Irving, and Byron. Readings address questions such as how we know the Bible is from God; character building topics such as work versus idleness; and topics of science and nature. This book is an education in itself and not merely a Reader. After mastering this, the student is reading better than most high school students.

William Holmes McGuffey (1800-1873) was a "born" educator. Beginning by teaching his younger brothers and sisters, William McGuffey accepted his first teaching position at 13 in a one-room school with 48 students. After graduating from Washington College and being ordained as a Presbyterian minister, he taught moral philosophy at Miami University in Oxford, Ohio for almost ten years. It was during this period that McGuffey wrote and compiled the Readers that made him famous. Later McGuffey rose to the rank of university president, serving Cincinnati College and Ohio University. He spent the final third of his life teaching moral philosophy at the University of Virginia.