Items related to Murrow: His Life and Times

Sperber, A. M. Murrow: His Life and Times

Murrow: His Life and Times 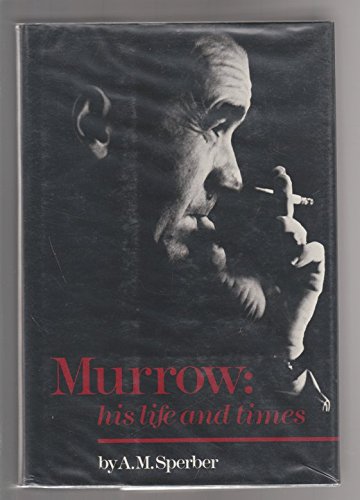 This definitive biography of broadcast journalist Edward R. Murrow is based on in-depth interviews and ten years of archival research, including declassified goverment documents and private files

Sperber, a freelance journalist, offers a richly detailed life of legendary CBS newsman Edward R. Murrow (19081965), whose WW II radio reporting ("Thisis London") and See It Now TV documentaries (including his expose on Sen. Joseph McCarthy) set the highest standards for broadcast journalism. While sometimes creaking under the weight of her exhaustive research (over 150 interviews and previously untapped CBS, BBC, U.S. and Murrow papers), Sperber's book succeeds brilliantly in illuminating crucial periods: her subject's early exposure to ideas and world affairs in his work at the Institute of International Education and in efforts on behalf of refugee German scholars; his pioneering wartime reporting with "Murrow's Boys" (William Shirer, Howard K. Smith, etc.); and his frustrating battles with management, sponsors and Cold War critics at CBS-TV, where his independence foundered ultimately with the rise of a large, tightly controlled news organization. Behind the handsome, chain-smoking superstar (who, ironically, was best known for his celebrity TV interviews on Person to Person, which he deemed embarrassing), Sperber finds a complex intellectual and moralist, given to dark moods, whose creative achievements occurred in a medium that never rose to his vision for it. Must reading for anyone interested in Murrow and early broadcasting. Photos. BOMC alternate.
Copyright 1986 Reed Business Information, Inc.

1. Murrow: His Life and Times

2. Murrow: His Life and Times