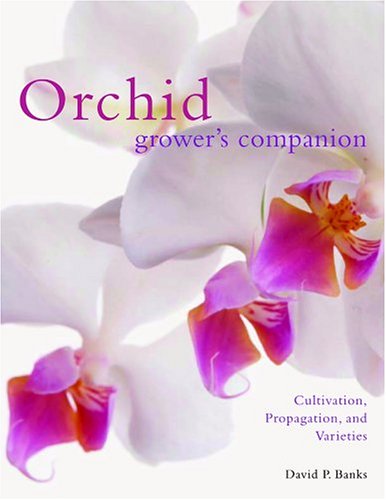 Growing orchids is a hobby more than two millennia old, and from the beginning these beautiful flowers have enjoyed a constant and unparalleled cult status among enthusiasts. Orchid Grower's Companion explains in accessible detail the natural habitat of some 400 orchid species, hybrids, and variants, with the information leading directly into practical propagation and cultivation guidance, including requirements for water, lighting, compost, and potting. Illustrated throughout with breathtaking images, Orchid Grower's Companion is an irresistible volume for anyone with even a passing interest in growing orchids.

David Banks has been growing orchids in Sydney, Australia, for over 30 years. He is the editor of the Australian Orchid Review and a member of the Orchid Specialist Group of the World Conservation Union's Species Survival Commission. David lectures worldwide and regularly appears on television and radio shows in the U.S. and Australia.

Orchids are threatened in the wild by two main factors — habitat destruction and overexploitation. However, these factors do not affect all orchids equally.

Many orchids hold a precarious existence, with the majority only occurring in geographically restricted areas. This aspect of their biology is their downfall. When the forests are cleared the orchids become extinct. An example of this is Epidendrum ilense from Ecuador. Soon after the species was discovered, the forest was cleared and it is now extinct in the wild. Habitat destruction can come in many forms from clearance of forest for agriculture, mining, logging, or urban expansion to the insidious invasion of non-native species that out-compete the local orchid. It can also be on widely different scales, from the felling of a single tree containing hundreds of epiphytes, or from chemical contamination of a local orchid population, to the clearance of huge tracts of forest for timber. Unfortunately habitat destruction is at its greatest in the tropics where the diversity of orchid populations is at its highest.

Habitat destruction does not discriminate between a flamboyant Cattleya or a tiny Pleurothallis. It is indiscriminate, and because of this, habitat conservation is the single most important aspect of orchid preservation.

Tropical orchids do not generally die of old age, they are often as long-lived as the substrate they grow on, and therefore it is only when this is destroyed that the orchid dies. This may allow some orchids to survive habitat destruction until a time when the forest can regenerate.

It is not the highly showy orchids that are threatened with extinction, as most of these are already entrenched in cultivation. Rather it is the many miniature species, with little horticultural merit, such as Pleurothallis and the related Stelis from South America that are under threat. In reality, only a small percentage of the world's orchid flora is in cultivation in specialist nurseries, botanical institutions, and private collections.

Orchids form a part of a very delicate and complex ecosystem that can easily become unbalanced. Most orchids have evolved to attract a specific pollinator. If the pollinator disappears the orchid may die out over a period of decades (or perhaps earlier).

Despite this, new species continue to be discovered, and a number of "lost" species have been relocated. Ironically, as more and more forests are cleared, people have been able to gain access to areas that were previously inaccessible or required many days' hiking over difficult terrain. A number of rare and unusual species of orchids and other ornamental plants are still being found in countries such as Ecuador and Colombia in South America, and Sumatra, Sarawak, and Sulawesi in Southeast Asia, as well as the highlands of New Guinea. Yet, one wonders how many species have become extinct before they have ever been