Items related to Tortured for Christ 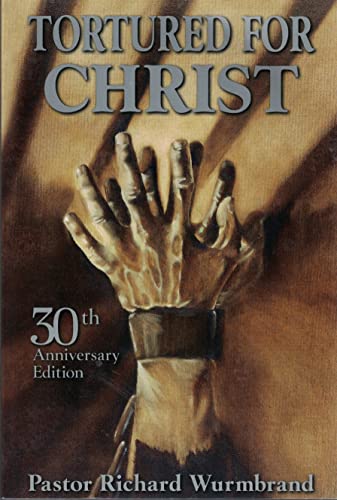 "Tortured for Christ" - After years of imprisonment and solitary confinement, enduring inhumane torture, Richard Wurmbrand emerges with a powerful testimony of courageous faith. Even today, believers are suffering and dying for Christ, yet their faith will not falter under the most unthinkable persecutions. In this stirring account, Wurmbrand (founder of The Voice of the Martyrs) encourages us to remember those in chains and equips us to help our persecuted brothers and sisters in Christ around the world.

Pastor Richard Wurmbrand is an evangelical minister who endured fourteen years of Communist imprisonment and torture in his homeland of Romania. Few names are better known in Romania, where he is one of the most widely recognized Christian leaders, authors, and educators. In 1945, when the Communists seized Romania and attempted to control the churches for their purposes, Richard Wurmbrand immediately began an effective vigourous "underground" ministry to his enslaved people as well as the invading Russian soldiers. He was arrested in 1948, along with his wife, Sabina. His wife was a slave-laborer for three years on the Danube Canal. Richard Wurmbrand spent three years in solitary confinement, seeing no one but his Communist torturers. He was then transferred to a group cell, where the torture continued for five more years. Due to his international stature as a Christian leader, diplomats of foreign embassies asked the Communist government about his safety and were informed that he had fled Romania. Secret police, posing as released fellow-prisoners, told his wife of attending his burial in the prison cemetery. His family in Romania and his friends abroad were told to forget him because he was dead. After eight-and-a-half years in prison, he was released and immediately resumed his work with the Underground Church. A couple of years later, in 1959, he was re-arrested and sentenced to twenty-five years in prison. Mr. Wurmbrand was released in a general amnesty in 1964, and again continued his underground ministry. Realizing the great danger of a third imprisonment, Christians in Norway negotiated with the Communist authorities for his release from Romania. The Communist government had begun "selling" their political prisoners. The "going price" for a prisoner was $1,900; there price for Wurmbrand was $10,000. In May 1966, he testified before the U.S. Senate's Internal Security Subcommittee and stripped to the waist to show the scars of eighteen deep torture wounds covering his torso. His story was carried across the world in newspapers throughout the U.S., Europe, and Asia. Wurmbrand was warned in September 1966 that the Communist regime of Romania planned to assassinate him; yet he was not silent in the face of this death threat. Founder of the Christian mission, The Voice of the Martyrs, he and his wife traveled throughout the world establishing a network of over thirty offices that provide relief to the families of imprisoned Christians in Islamic nations, Communist Vietnam, China, and other countries where Christians are persecuted for their faith. His message has been, "Hate the evil systems, but love your persecutors. Love their souls, and try to win them for Christ." Pastor Wurmbrand is the author of several books, translated into over sixty languages throughout the world. He has been called the "Voice of the Underground Church." Christian leaders have called him a living martyr and "the Iron Curtain Paul."

When you have read this book, pass it to your children. No generation should miss this story. Rob Parsons It's a Christian classic. Approach with prayer. It could change your life. Rob Frost This book was singularly instrumental in awaking the conscience of the free world to the horrors experienced by our brothers and sisters behind the iron curtain. I remember reading the book many years ago and being deeply moved and convicted. Millions of others were as well. Charles W. Colson, Prison Fellowship Ministries Tortured for Christ made an impact on my life as a recently converted teenager in the sixties. I welcome this new edition of Tortured for Christ and pray that its story will shake many twenty first century Christians out of their complacency towards those who around the world today are still tortured for their Christian witness. Rev John S. Smith, UK Director, Evangelical Allian