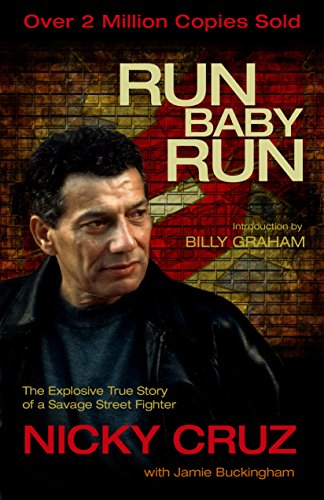 One of the most influential Christian books of modern times, with over 12 million copies sold worldwide. The book is being re–issued with a compelling foreword by Tim Dilena to emphasize its relevance today.

Nicky Cruz’s powerful story of redemption, salvation and transformation is a powerful testament to the glorious transformative power of the Gospel of Jesus Christ. A vicious fighter, criminal, drug user, drunkard and thief he was the leader of one of New York City’s most violent gangs, the Mau Mau. But all that changed when he met David Wilkerson, author of The Cross and the Switchblade, who refused to give up on Nicky Cruz. When he finally met Jesus and accepted Him as his Savior, Nicky Cruz left his violent life and gang to start a ministry that impacts young people today. His story proves that anyone can be reached with the gospel of Christ.
“The story of Nicky Cruz is remarkable. It has all the elements of tragedy, violence and intrigue – plus the greatest of all ingredients: the power of the Gospel of Jesus Christ.” – Billy Graham

In the 40 years that have passed since he came to Christ in New York through the selfless devotion of David Wilkerson, Nicky Cruz continues to travel widely around the world, speaking to hurting people in all walks of life. His ministry has reached thousands of innercity gang members as he speaks to their need from his own experience. Former New York gang leader, Cruz is a Christian evangelist, the founder of Nicky Cruz Outreach, an evangelistic Christian ministry. He was also once the director of Teen Challenge, serving under David Wilkerson before founding another ministry home himself in California.