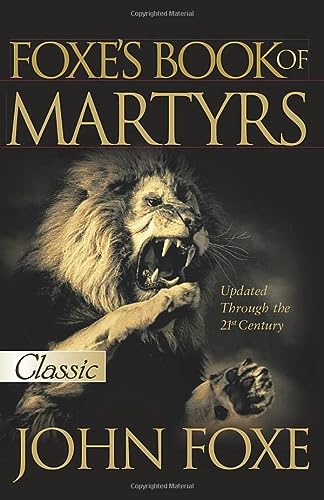 Would you suffer persecution, poverty, and prison for Christ?

Would you endure cruel tortures that take your mind and body to the brink of death and beyond?

Would you watch your children suffering for their faith and urge them to remain faithful to Christ?

Would you endure inhuman tortures and "hold fast the profession of your faith without wavering" (Hebrews 10:23)?

Would you stand boldly and without shame and confess Christ as your Lord, to your own and to your family's peril?

Two thousand years of martyrs
For nearly two–thousand years, courageous men and women have been tortured and killed because of their confessions of Jesus Christ as Lord and Savior.

The New Foxe's Book of Martyrs tells their stories. Stories of heroic courage and overcoming faith. Stories of love of God and Christ. Stories of the amazing grace of God that enabled men, women, and children to endure persecutions and often horrible deaths.

Foxe's last revision of his Book of Martyrs was in 1570. In the 18th century others added to his book. But Christians have continued to be persecuted and martyred every year since then. More Christians were martyred in this century alone than in all the past centuries combined.

The New Foxe's Book of Martyrs tells their stories from A.D. 37 to 1997 in modern English, and includes new historical data that clarifies and harmonizes people, places, and times.

The New Foxe's Book of Martyrs is the most up–to–date version of Foxe's book ever published. It is essential reading for the study of Christian persecution in Foxe's day and in ours

John Foxe (1516–1587), born at Boston, Lincolnshire, England, was a devout and scholarly boy. He attended Brasenose College, Oxford and then Magdalen College where he held a fellowship for seven years. While a student, Foxe became known for his scholarly wisdom and piety and could have led a quiet and successful life; becoming aware of certain spiritual truths, however, Foxe embraced Protestantism. In 1545, he resigned his fellowship at the university and become a tutor for the Lucy family of Warwickshire. Shortly thereafter, he married Agnes Randall of Conventry. John Foxe worked for the Reformation, writing tracts and beginning his famous history of the persecutions and martyrdoms in England from John Wycliffe through the early 1500s. When staunch Roman Catholic Queen Mary took the throne in 1553, Foxe and his family fled England for the continent in fear for their lives. There he continued working on his manuscript, which was eventually published in 1563 as The Acts and Monuments of These Latter and Perilous Days. Foxe continued laboring on his work until his death in 1587.

Shipping: US$ 13.77
From United Kingdom to U.S.A.
Destination, rates & speeds