Items related to See You at the Top

Ziglar, Zig See You at the Top

See You at the Top 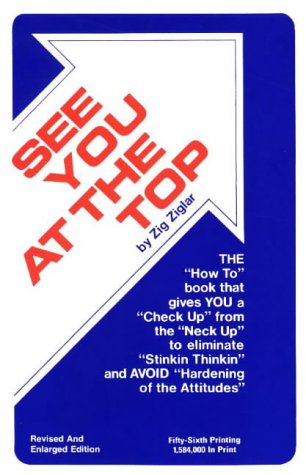 "An exciting book loaded with logical way to get mo-tivated and stay that way. Profound enough for a professor, yet simple enough for a teen ager"....... The Dallas Times Herald.

As a talented author and speaker his international appeal has transcended every color, culture, and career. Recognized by his peers as the quintessential motivational genius of our times, Zig Ziglar’s unique delivery style and powerful messages have earned him many honors and today he is considered one of the most versatile authorities on the science of human potential. Having shared the stage with Presidents Ford, Reagan and Bush, Generals Norman Schwarzkopf and Secretary of State Colin Powell, Dr. Norman Vincent Peale, Paul Harvey and Dr. Robert Schuller, he is one of the most sought after personal development trainers in the world. As a patriot he has been recognized three times in the Congressional Record of the United States for his work with youth in the drug war and for his dedication to America and the free enterprise system. Titans of business, politics and sports consider him to be the single greatest influence in their lives.

The iconic motivational expert gives a spellbinding talk about goals, commitment, integrity, and faith in one's resources. In a recording made when Ziglar was in his late 40s, he delivers nonstop aphorisms and stories in his unmistakable preacher's cadence. He's a master at projecting palpable good will and persuading his audience to embrace his ideals. Though Ziglar has offered this advice before, he gives it renewed power as he unfolds point after point with a vocal dynamism and confidence that few listeners will be able to resist. The core message is classic Ziglar: All of us can get to the top if we specify our goals, stay positive, and never waver in believing in our right to be happy and successful. T.W. © AudioFile 2010, Portland, Maine

7. See You at the Top (Biscuits, Fleas and Pumphandles)