Items related to Alex Stewart: Portrait of a Pioneer

Alex Stewart: Portrait of a Pioneer 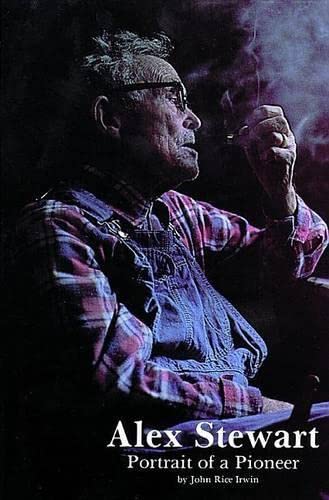 Alex Stewart was a recipient of a National Heritage Fellowship Award in 1983 by the National Endowment for the Arts in Washington which recognized him as a living national treasure. Over a twenty year period of friendship the author developed a profound respect and great love for Alex Stewart, a truly remarkable Tennessee mountain character whose life epitomizes the pioneer development in America. The best of hundreds of hours of recorded conversations with Stewart are compiled into a moving portrait of this cooper, father of 13, farmer, logger, railroad man, and do-it-yourself interpreter of his rugged homeland. Because the ways Stewart tells his own stories are as important as the stories themselves, he is allowed to do most of the "talking" throughout the book. Through his own account of the people around him, Alex describes his rural life in the late 19th and 20th centuries through stories such as when he was bit by a rabid dog, when neighbor children begged for food, or how people gathered honey, made marbles, moonshine or furniture. Throughout his 94 years, Alex, who died in 1985, depended upon his own good sense to direct him and it led him through a rich and fascinating life. This book is a genuine labor of love.

Author John Rice Irwin is founder and director of the Museum of Appalachia in the nationally acclaimed farm-village settlement of Norris, Tennessee. His main interest lies in the colorful people of these Southern Appalachian Mountains; their history, culture and pioneer-frontier lifestyle. To him, Alex Stewart portrays the best of the lot.

2. Alex Stewart: Portrait of a Pioneer

4. Alex Stewart : Portrait of a Pioneer

6. Alex Stewart: Portrait of a Pioneer

7. Alex Stewart: Portrait of a Pioneer

Book Description Schiffer Publishing Ltd. Paperback / softback. Condition: New. New copy - Usually dispatched within 3 working days. Here is a moving literary portrait of real 20th century pioneer, Alex Stewart, a cooper, father of 13, farmer, logger, railroad man, and do-it-yourself interpreter of his rugged homeland in the mountains of Tennessee. His courage, humor and strength have endeared him to all who knew him, and now we can meet him through the book. Seller Inventory # B9780887400537

8. Alex Stewart : Portrait of a Pioneer