Items related to The North End: Photographs by John Paskievich 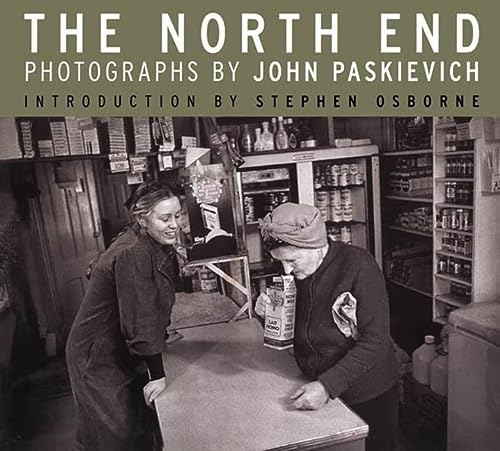 Winnipeg’s North End has informed the Canadian mythology and influenced the national psyche. The North End also divides and defines the city of Winnipeg, shaping its politics and sense of identity. It is here where First Nations and Old and New World immigrants cross the boundaries of ethnicity, class, and culture, creating a complex multicultural community. There is joy here, and pride, and poverty, and richness, and beauty. John Paskievich grew up in the North End. In these photographs, taken between the mid-1970s and the mid-1990s, he set out to explore the North End he knew in his youth. What he found were traces of it, captured in the stillness in which the past still lingers and in the dignity and singularity of its inhabitants.

John Paskievich was born in Austria of Ukrainian parents and immigrated to Canada as a young child. His photographs have been widely exhibited and published in various periodicals and in several books, including A Voiceless Song: Photographs of the Slavic Lands, introduced by Josef Skvorecky, and A Place Not Our Own. His documentary films have garnered critical praise and won numerous awards. Paskievich lives in Winnipeg.

“Paskievich’s real, unadorned glimpse into the community and its people is striking, but most of the scenes and characters captured here aren’t pretty in the conventional sense. It’s his inclusion of these tarnished details – gritty streets, peeling piont and wrinkled, weary faces – that truly gives the work its unfiltered beauty. Similar to Winnipeg’s North End itself, Paskievish’s new book is a gem that can only be discovered, explored and cherished by a patient and sympathetic eye.”– Up! Magazine, March 2008

“Whether sitting, walking, lying, standing, marching, dancing, or simply staring into his lens, Paskievich’s characters steal the show and turn his book of stills into a slide show that moves, informs and entertains from cover to cover.”– New Pathways, January 31, 2008

Book Description University of Manitoba Press, 2007. Paperback. Condition: Good. Connecting readers with great books since 1972. Used books may not include companion materials, some shelf wear, may contain highlighting/notes, may not include cdrom or access codes. Customer service is our top priority!. Seller Inventory # S_223549745

Book Description University of Manitoba Press. Paperback. Condition: Very Good. A copy that has been read, but remains in excellent condition. Pages are intact and are not marred by notes or highlighting, but may contain a neat previous owner name. The spine remains undamaged. At ThriftBooks, our motto is: Read More, Spend Less. Seller Inventory # G0887557007I4N00

Book Description University of Manitoba Press, 2007. Condition: Good. A+ Customer service! Satisfaction Guaranteed! Book is in Used-Good condition. Pages and cover are clean and intact. Used items may not include supplementary materials such as CDs or access codes. May show signs of minor shelf wear and contain limited notes and highlighting. Seller Inventory # 0887557007-2-4