Items related to Fine Incisions: Essays on Poetry and Place 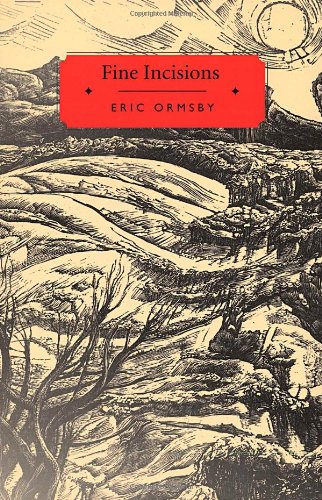 Fine Incisions is a collection of twenty-four gracious, intelligent and occasionally fractious essays, wide-ranging in their interests and rigorous in their analyses. Ormsby's reverence for language is luminously clear as he examines his international travels, the work of James Merrill, the state of North American literary criticism and more in a series of essays as vivacious as they are provocative.

Eric Ormsby's poetry has appeared in most of the major journals in Canada, England and the U.S., including The New Yorker, Parnassus and The Oxford American. His first collection of poems, Bavarian Shrine and other poems (ECW Press, 1990), won the QSpell Award of 1991. In the following year he received an Ingram Merrill Foundation Award for `outstanding work as a poet'. His collection, Coastlines (ECW Press, 1992), was a finalist for the QSpell Award of that year. A sixth collection, Time's Covenant, appeared in 2006 with Biblioasis. His work has been anthologized in The Norton Anthology of Poetry as well as in The Norton Introduction to Literature.

Eric and his wife Irena currently live in London, England.

In putting together this second selection of essays, all written at different times over the last dozen years, I've tried to avoid imposing an after-the-fact coherence. These are essays about certain poets and novelists, as well as other, less conspicuous figures, whose accomplishments I admire and in some cases, even love -- though not always uncritically. I've also included evocations of certain places -- Prague and Morocco -- which have been important to me. At first I thought that including these travel essays would provide a kind of counterfoil to the more purely literary pieces. I wanted to replace the smell of the inkpot -- well, the anodyne scent of the inkjet cartridge -- with the stink of real streets, the more pungent the better. But, as I discovered, these essays turned out to be as much about works of the imagination as about the places themselves.

Then again, to set fine but forgotten or unfashionable poets or novelists (like Walter de la Mare or J.K. Huysmans), beside such acknowledged luminaries as Tolstoy or Bob Dylan seemed to me a way of provoking interesting reverberations. I believe that the casual victims of passing fashion, or those whom fashion has never deigned to notice, may sometimes have more to teach us than the successful and the celebrated. In any case, as I argue in the title essay, a critichas an obligation to do justice to the unfairly forgotten, if only for our own delight. This is less a matter of redress than of reclamation.

The two portraits -- one of a great contemporary poet in full swing, the other of an equally great and much-loved scholar -- are my attempts to bring living voices, actual or remembered presences, into the mix. I wanted to rattle the more formal pieces a bit; however, I suspect that they've settled in together a bit too cozily. I hadn't expected happenstance to be so shrewd. In the end, of course, whatever coherence -- or happy incoherence -- there may be in a collection of essays written over a period of years is perhaps best left for the reader to discover.

Thanks to my editors, particularly at The New Criterion and at Parnassus (the journals where most of these essays first appeared), I've enjoyed the freedom to pick my own subjects and to write about them pretty much as I wish; at the same time I've benefited from those same editors' meticulous attention to matters of style as well as of accuracy -- accuracy of tone as much as of fact. At The New Criterion, Hilton Kramer and Roger Kimball have long been generous friends, as well as inspiring essayists in their own right, and I am sincerely grateful to them. I have a more specific debt of gratitude to another friend at The New Criterion, its Executive Editor, the brilliant poet and essayist David Yezzi. David first invited me to write for the magazine in 1999, and his constant support and encouragement, as well as his uncommon discernment, have been of inestimable value to me ever since. I dedicate this collection to him in thanks.

Both Herbert Leibowitz and Ben Downing, co-editors of Parnassus, have been steadfast friends and exemplary editors. I deeply appreciate the care they have lavished on my essays.

I am also grateful to another friend, the superb poet and critic Carmine Starnino, who invited me to put together this collection for The Porcupine's Quill and has seen it through the press. His perceptive comments and his critical candor have helped to make this a better book than it might have been.

Finally, as always, I thank my wife Dr. Irena Murray. Whatever insight I may have into things Czech -- or indeed, into ``magic Prague'' itself -- I owe to her. She has saved me not only from egregious errors in Czech (those maddening accents!) but her native elegance of expression and her unfailing sense of style, in language as in life, have guided me throughout; and her love continues to sustain me.

Book Description Porcupine's Quill, Erin, Canada, 2010. Soft cover. Condition: New. 1st Edition. Original printed wraps. 256 pp. Octavo. Fine Incisions is a collection of twenty-four gracious, intelligent and occasionally fractious essays, wide-ranging in their interests and rigorous in their analyses. Ormsby's reverence for language is luminously clear as he examines his international travels, the work of James Merrill, the state of North American literary criticism and more in a series of essays as vivacious as they are provocative. Printed offset by Tim Inkster on the Heidelberg KORD at the printing office of the Porcupine's Quill in the Village of Erin, Wellington County, Ontario, Canada. Smyth sewn into 16-page signatures with hand-tipped endleaves front and back. Seller Inventory # 9780889843349