Items related to Inside the Nye Ham Debate

Inside the Nye Ham Debate 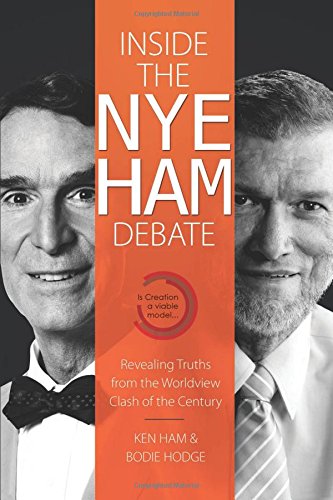 The debate to determine whether or not creation is a viable origins model in today’s modern scientific era!

With millions watching this live debate on February 4, 2014, “Bill Nye, the Science Guy” squared off with Answers in Genesis founder and president Ken Ham. This event echoed the worldviews at work in our lives today and put two of the most unique and recognizable advocates of their positions on the same stage to face not only each other, but the many who watched. More answers, more perspectives, more truth to answer the world’s most critical question: How did we and all we know come to be here, at this place and this time in the history of the universe? Are we accidental products of evolution or the centerpiece of God’s marvelous creation?

3.5 million have watched the debate on YouTube. This does not include any that watched it live. This is all after the debate. It is also aired on Daystar many times throughout the year.

Ken Ham is the president/CEO and founder of Answers in Genesis - U.S. and the highly acclaimed Creation Museum. Ken Ham is one of the most in-demand Christian speakers in North America. Ken’s emphasis is on the relevance and authority of the book of Genesis and how compromise on Genesis has opened a dangerous door regarding how the culture and church view biblical authority. His Australian accent, keen sense of humor, captivating stories, and exceptional PowerPoint illustrations have made him one of North America’s most effective Christian communicators.

Mr. Bodie Hodge attended Southern Illinois University at Carbondale and received a B.S. and M.S. in mechanical engineering. His specialty was a subset of mechanical engineering based in advanced materials processing, particularly starting powders. Currently, Bodie is a speaker, writer, and researcher for Answers in Genesis USA. He is the author of The Fall of Satan and co-author of Dragons: Legends & Lore of Dinosaurs.

1. Inside the Nye Ham Debate

2. Inside the Nye Ham Debate

3. Inside the Nye Ham Debate