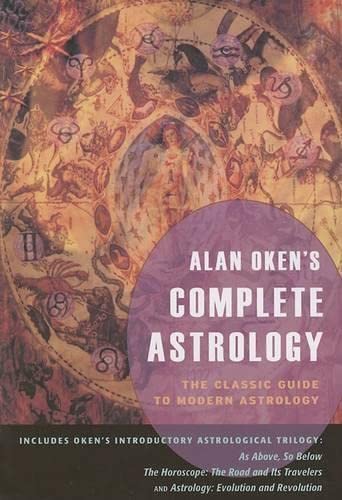 "Our job is to lovingly and consciously cooperate with the forces at work on this globe at this time.Â Â Astrology provides a way to link the individual with a conscious attunement to the planetary forces that are part of and affect the whole." More than fifteen years ago, Alan Oken pioneered the development of New Age astrology with the publication of three books collected in this comprehensive edition. Now, newly updated, Alan Oken's Complete Astrology charts the cosmological pathway to greater personal fulfillment and spiritual attunement through a deeper, more intuitive understanding of our own power--and the age we live in. Featuring state-of-the-art astrological charts and diagrams, line drawings, charts of contemporary celebrities, an exhaustive bibliography and much more, this new edition of the classic trilogy is one of the most accessible and informative guides to the heavens ever written. For beginners and experts alike, Alan Oken's Complete Astrology is your key to understanding the laws of the new planetary age.

Alan Oken is the founder and director of The Wisdom School, he's also the author of hundreds of articles for various astrological and metaphysical magazines and journals. He wrote over a dozen books, including: Soul-Centered Astrology, A Key to Your Expanding Self, Houses of the Horoscope, and Rulers of the Horoscope. An internationally known lecturer and teacher, he speaks and writes six languages and has taught in more than 30 countries.

The horoscope of the late Dr. King reveals the planetary positions of a humanitarian and visionary. Perhaps one of the most remembered speeches Dr. King gave was the one in which he spoke of "going to the mountain" and there communicating with his inspiring Forces. Capricorn is, of course, the sign of the mountain climber and the position of the Sun at the M.C. certainly reveals the prominence which Dr. King would earn among his fellows. Jupiter is in the 12th House but within orb of a conjunction to the Ascendant, indicating a religious and philosophical nature. The Moon conjunct Venus in Pisces attunes one to the plight of one's fellow man while Jupiter's trine to Neptune points to a person who can work to relieve oppression. Saturn fills out the grand trine and is the lord of his 10th House, as well as the dispositor of the Sun. This position shows that Dr. King was not only aware of human suffering but (1) could establish certain plans to relieve that suffering due to an understanding of the socio-economic structure underlying it (2) could create and implement new socio-economic structures to take the place of the old; and (3) had the personal power and drive to lead his people to realize the plans he envisioned for them.

Pluto opposes the Sun and is trine the Moon from the cusp of the 4th House to the 11th. This combination of planetary influences points to Dr. King's identification with the collective consciousness of his race and his need to constantly improve the condition of blacks in the United States. His struggles would lead to his own evolutionary growth, as seen by the Sun's position and its relationship to Pluto and the Moon, as well as that of the people he was serving. The two destinies--personal and collective--are thereby seen as joined in his planetary structure.

The tendency toward the violent death that would curtail his visions, however, can also be seen in the horoscope. Uranus in the 12th House is square his 8th House Saturn while Mars opposes the latter. An unseen enemy or assassin also involved in politics would be the likely assailant (Uranus in Aries in the 12th). Although Mars and Uranus are not close enough to form a square, Mars is the dispositor of Uranus in Aries and as such is linked with its effects. Pluto's opposition to a 10th House Sun can cut short one's career, while Mars opposing the 10th House ruler, Saturn, certainly indicates the possibility of the curtailment of one's ambitions through some sudden and violent act. This is further emphasized by the Uranus square as well as the position of the Moon in relationship to Saturn and Mars. Luna is in the House of public organizations; and of hopes and wishes, which on the one hand would not reach fulfillment (Saturn square the Moon) and on the other hand could be stopped through sudden violence (Mars square the moon).
Meher Baba
(Religious Leader and Mystic)

The name Meher Baba means "compassionate father," an appellation certainly in keeping with the Baba's Sun sign, Pisces. Once again we find the Sun and Moon in close aspect with Uranus (here Sun trine and moon conjunct), indicating the potential expansion of personal consciousness to a cosmic level. Uranus's position at the Midheaven also reveals that the Baba's work would be known to a vast number of people and that he would have a definite popularity.

Scorpio (the sign of the Moon-Uranus conjunction) can give great control over oneself. Baba's self-mastery is further emphasized by Saturn's conjunction with the Moon and their trine to the Sun. These factors contributed to the Baba's ability to keep his vow of silence for many decades. His faculties of communication were far from limited, however, as Mercury's exact sextile to Jupiter would indicate. He "spoke" to vast audiences either impersonally through his voluminous writings or personally through sign language. Mars in Capricorn is midpoint the Sun and Moon, forming exact sextiles to each of the luminaries. This gave him tremendous drive as well as the magnetism to silently command a large personal following.

The Sun is square a conjunction of Pluto and Neptune. This indicates the great inner life which must have been so much a part of the man as well as his inner struggles with the various levels of energy existing in the vastness of the invisible realms. Such struggles for personal and planetary evolution are impossible to delineate, for the level of consciousness attained by such a one as the Baba is far beyond the descriptive capabilities of the writer.
Dr. Albert Schweitzer
(Missionary-Author-Doctor)

This horoscope reveals a strong need to find and establish oneself through a total surrender to human service. The aspects in the chart which reveal this tendency are the conjunction of the Moon with Neptune and their square to the Sun-Mercury conjunction, and Pluto's trine to the Sun-Mercury. The Neptune aspects sensitize one to the entire realm of human feelings. Neptune in its particular position in the chart also gives a longing for the uncommon as well as a strong reclusive tendency. Certainly the hospital he founded in Africa provided the environment for this man's temperament.

Aries and Capricorn, the signs of Luna and Sol respectively, contribute to the need to establish something with one's own stamp on it. A need strong enough for the man to build his personal empire. But we must see here that the personal power drive revealed in this horoscope was channeled to doing good in the world and to the relief of suffering. This facet of Dr. Schweitzer's life, the direction his tremendous drives would take, cannot be judged by an examination of the natal chart. The need to devote one's energies to one's fellow man is a decision which takes place in the Soul of an individual. It is through conscious attunement to the Soul's Light that this decision can be carried forth in the material sphere of life. The natal horoscope is then the vehicle through which the Soul's energy is made manifest.

The vibrations contained in Dr. Schweitzer's Pluto trine the Sun-Mercury allows personal evolution, the "shedding of the snake's skin," to take place through his work. His being a healer is indicated by Neptune's rays, but can also be seen by Mars in Scorpio opposing Pluto. This would not only give him the desire to be in the company of death, but would give him a mitigating hand in working with the constant decomposition of the physical body which accompanies disease.

Jupiter opposing Neptune also points to a tendency to working with unfortunates, while Mars square Uranus can put one in a constantly dangerous environment. The T-square of Saturn-Mars and Uranus contributes to Dr. Schweitzer's strong self-will and determination in completing his personal goals. The grand trine of Venus-Uranus and the Moon indicates that his efforts would be supported and approved of by the masses in general, and that in spite of his natural reclusive nature, he would eventually achieve a certain amount of fame. The Capricorn Sun and Saturn sextile the Moon are aspects which reveal his devotion to his assumed responsibilities while also indicating the ability to endure great hardships.

Book Description Paperback. Condition: new. Paperback. The Classic Guide to Modern Astrology. Dealing from the utmost basics of the sun signs and planets to a more comprehensive guide for building and interpreting an astrological chart, this book includes exercises, workbook sections, background material, appendices, a bibliography and an index. Shipping may be from multiple locations in the US or from the UK, depending on stock availability. Seller Inventory # 9780892541256

Book Description Paperback. Condition: New. Language: English. Brand new Book. Our job is to lovingly and consciously cooperate with the forces at work on this globe at this time. Astrology provides a way to link the individual with a conscious attunement to the planetary forces that are part of and affect the whole. More than fifteen years ago, Alan Oken pioneered the development of New Age astrology with the publication of three books collected in this comprehensive edition. Now, newly updated, Alan Oken's Complete Astrology charts the cosmological pathway to greater personal fulfillment and spiritual attunement through a deeper, more intuitive understanding of our own power--and the age we live in. Featuring state-of-the-art astrological charts and diagrams, line drawings, charts of contemporary celebrities, an exhaustive bibliography and much more, this new edition of the classic trilogy is one of the most accessible and informative guides to the heavens ever written. For beginners and experts alike, Alan Oken's Complete Astrology is your key to understanding the laws of the new planetary age. Seller Inventory # BZV9780892541256