Items related to Something in the Water (Peter Shandy Mysteries)

MacLeod, Charlotte Something in the Water (Peter Shandy Mysteries)

Something in the Water (Peter Shandy Mysteries) 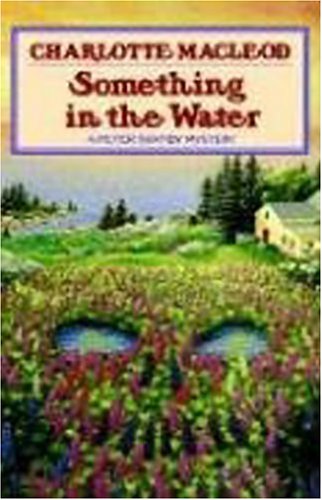 Peter Shandy, the botanist-sleuth from The Corpse in Oozak's Pond, discovers deception during a field trip, when a man is poisoned and the locals seek out the murderer--to give proper thanks. 35,000 first printing. Tour.

Charlotte MacLeod (1922-2005) was an internationally bestselling author of cozy mysteries. Born in Canada, she moved to Boston as a child, and lived in New England most of her life. After graduating from college, she made a career in advertising, writing copy for the Stop & Shop Supermarket Company before moving on to Boston firm N. H. Miller & Co., where she rose to the rank of vice president. In her spare time, MacLeod wrote short stories, and in 1964 published her first novel, a children's book called Mystery of the White Knight.

Despite its goofy plot, cast of caricatures, digressions and lack of suspense, MacLeod's lively mystery lampoon set in coastal Maine, where she lives, will surely please her myriad fans. Jasper Flodge, a loutish dinner guest at Bright's Inn, abruptly expires onto his recently cleaned plate of chicken pot pie and is pronounced dead of cyanide poisoning. The only other diners at the time are Peter Shandy, professor of botany at Balaclava Agricultural College and unofficial "sleuth-for-all-seasons," who was seen most recently in An Owl Too Many , and elderly Claridge Withington, an avid amateur horticulturist who reminds Shandy of the Ancient Mariner. Shandy proceeds to unravel a devious scam involving unloved, miserly Flodge, the flamboyant woman claiming to be his widow, and two others. He figures out the murderer and the suitably loony method. But he nevers solves the mystery that has drawn him from his native Massachusetts to Maine: Why do the lupines growing in the rocky soil of nearby Rondel's Head bloom so gloriously? And what keeps their nonagenarian nurturer, Frances Rondel, so spry? MacLeod has good sport with the laconic reputation of Maine residents, but this arch humor, no matter how fond, will likely appeal most to MacLeod followers. Mystery Guild selection .
Copyright 1994 Reed Business Information, Inc.

1. Something in the Water (Peter Shandy Mysteries)

Book Description Mysterious Press, 1994. Hardcover. Condition: New. Dust Jacket Condition: New. 1st Edition. FIRST EDITION/2nd PRINTING - THE BOOK IS NEW & UNREAD - SPINE HAS NOT BEEN CRACKED - BOOK HAS A TOUCH OF SOILING TO EXPOSED PAGE EDGES FROM SITTING ON A SHELF FOR YEARS - no MAJOR flaws or defects - Hardcover in Dust Jacket as issued. DUST JACKET IN PROTECTIVE BRODART COVER - A VERY COLLECTIBLE COPY OF THIS BOOK - PHOTOS OF THE ACTUAL BOOK SENT UPON REQUEST. THIS IS AN INTRODUCTORY PRICE FOR OUR GRAND RE-OPENING. ALL PRICES WILL BE ADJUSTED IN MAY TO REFLECT MARKET PRICES. The boards Are Clean, Not Bumped. Fore Edges Are Clean. Dust Jacket Is In Fine Condition. No Chipping, Crinkles, or tears. Not Price Clipped. All books are boxed and shipped with bubble wrap - ALL BOOKS HAVE BEEN BOXED IN CLIMATE CONTROLLED STORAGE AND HAVE NOT BEEN TOUCHED BY ANY OTHER HUMAN THAN ME FOR AT LEAST THE LAST 10 YEARS - ALL BOOKS ARE SEALED AND BUBBLE WRAPPED AND SHIPPED IN BOXES - YOU CAN BUY HERE WITH CONFIDENCE KNOWING THAT A BUNCH OF STRANGERS HAVE NOT HANDLED YOUR BOOK -. Seller Inventory # 002385

2. Something in the Water

3. Something in the Water (Peter Shandy Mysteries)

4. Something in the Water MacLeod, Charlotte

Book Description Condition: New. Peter Shandy, the botanist-sleuth from The Corpse in Oozak's Pond, discovers deception during a field trip, when a man is poisoned and the locals seek out the murderer to give proper thanks. 35,000 first printing. Tour. Seller Inventory # 9780892964307

5. SOMETHING IN THE WATER (PETER SH