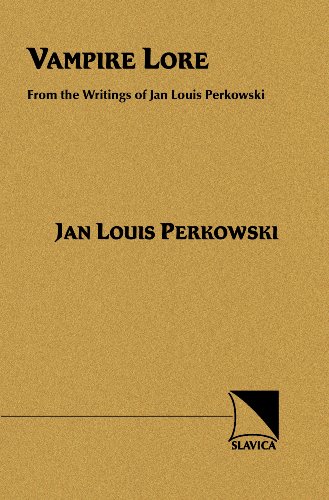 Perkowski (Slavic languages and literatures, U. of Virginia) found that Slavic folk belief in vampires came to the New World with Kashubian emigrés to Ontario, Canada. The anthology contains this bicultural Slav's collected oral histories and writings on this Slavic mythology since the 1970s, e.g., The Darkling: A Treatise on Slavic Vampirism (1989), and translations of others' works on this tradition. The book concludes with charted analyses of Bram Stoker's Dracula and the linguistic conflation of assorted demons. Illustrations include an East European map of traditional religions, and b&w photographs of churches and cemeteries. Some references are not translated into English. The book lacks an index. Annotation ©2007 Book News, Inc., Portland, OR (booknews.com)

Jan Louis Perkowski is Professor of Slavic Languages and Literatures at the University of Virginia, Charlottesville. His courses on vampire mythology and folklore are always in great demand with students. In addition to his lifelong work on vampires, other research and teaching interests include Slavic mythology, Russian language, and issues in diachronic Slavic linguistics.

[T]he lore of new, postmodern urban Slavic vampire is thriving in Russia and Eastern Europe. In addition to the Moldovan pop group O'Zone's vampiric references in the music video version of their global eurodisco hit from 2004 "Dragostea din tei" ["Under the Linden Tree"], more recent publications and films in Russia on the subject of vampires, such as Viktor Pelevin's 2007 "Ampir 'V'" and Sergei Lukyanienko's trilogy of "Night Watch" (2003), "Day Watch" (2005), and "Evening Watch" (2006), along with the corresponding "Dozor" films of Timur Bekmambetov, have restored the centuries-old position of the vampire in Slavic culture--from ancient to classical to popular. Perkowski's volume is a timely and useful contribution to the growing interest ... in the study of the Slavic regions and their lore of the vampire. --Thomas J. Garza, "Slavic and East European Journal"