Items related to Nan Goldin: The Ballad Of Sexual Dependency 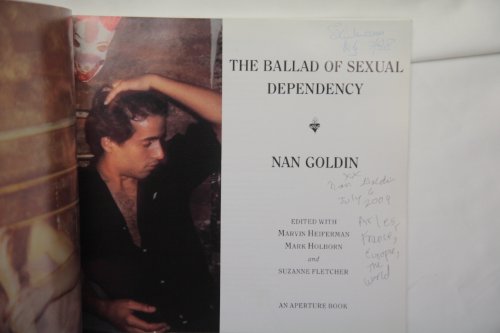 A photobook classic, and perhaps the work for which New York photographer Nan Goldin remains best known, The Ballad of Sexual Dependency is a visual diary chronicling the struggle for intimacy and understanding between friends and lovers collectively described by Goldin as her “tribe.” Her work describes a late 1970s/early 1980s New York now long gone, and a world that is visceral and seething with life. As Goldin writes: “Real memory, which these pictures trigger, is an invocation of the color, smell, sound, and physical presence, the density and flavor of life.”

Nan Goldin was born in Washington, D.C., in 1953. At eighteen, she began photographing her exted family in New York City; Provincetown, Massachusetts; and London. Her work continues to be exhibited worldwide.

1. The Ballad of Sexual Dependency

3. The Ballad of Sexual Dependency

4. The Ballad Of Sexual Dependency