Items related to Donna Ferrato: Living With The Enemy

Donna Ferrato: Living With The Enemy

Donna Ferrato: Living With The Enemy 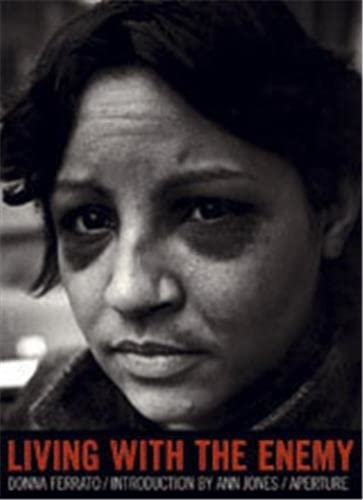 This critically acclaimed, graphic report on family violence reveals the lives of ordinary women--and the men who batter them. “Hits you hard both viscerally and emotionally... She's a powerful reporter; her photos are as alarming and as memorable as a scream in the night.
--Vince Aletti, The Village Voice
Living with the Enemy is both harrowing and moving. With their shocking immediacy, these photographs offer the kind of urgent call to action provided by all great documentary photographs.
--Charles Hagen,The New York Times

Donna Ferrato, photographer and mother, has been with camera in hand for more than sixteen years. Her photographs have been published extensively, primarily in Life, Time, Stern, People, Fortune, the New York Times Magazine, and the Philadelphia Inquirer Magazine. She is the founder of the Domestic Abuse Awareness Project (DAAP). Her work on domestic violence has won her numerous awards, among them the Crystal Eagle Award for courage in journalism, from the International Women's Media Foundation; the Kodak Crystal Eagle Award; the Robert F. Kennedy Award for Humanistic Photography; and the W. Eugene Smith Grant for Humanistic Photography.

Ann Jones is a journalist, activist, and critic. She is the author of the best-seller Women Who Kill, and co-author of When Love Goes Wrong: What do Do When You Can't Do Anything Right. Her most recent book is Next Time, She'll Be Dead: Battering and How to Stop It (Beacon Press, 1994).

"A gripping work of photojournalism. . . . The photographer's straight-on-style never exaggerates or sensationalizes."--People magazine

"Living with the Enemy is a book that is difficult to pick up and impossible to put down. It is a book that will completely transform assumptions about battered women and the men who abuse them."--Elizabeth Hess, The Women's Review of Books

"Ferrato's grim achievement is to tear down the curtain, revealing ordinary women--and yes, the men who batter them--in desperately ordinary kinds of pain. . . [It is] a new kind of work: journalism focused on intimate domestic affairs; combat photography in the home."--
The Washington Post

"With great force and compassion, Ferrato has traced domestic violence against women from its ambiguous social origins to its most violent physical manifestations. Her stark black-and-white photographs and straightforward text constitute a work of far-reaching sociological and photographic significance."--Friends of Photography newsletter

1. Donna Ferrato: Living With The Enemy

2. Donna Ferrato: Living With The Enemy

3. Donna Ferrato: Living With The Enemy

4. DONNA FERRATO: LIVING WITH THE E

5. DONNA FERRATO: LIVING WITH THE E

6. DONNA FERRATO: LIVING WITH THE E