Zeinert, Karen McCarthy and the Fear of Communism in American History

McCarthy and the Fear of Communism in American History 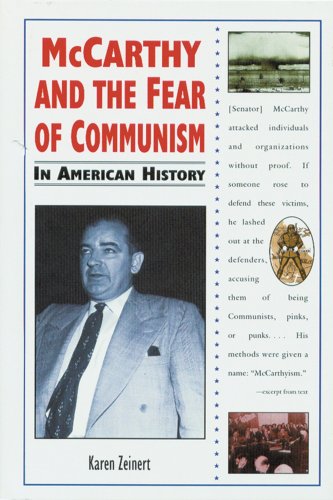 Outlines the rise of anti-communism in the United States beginning after World War I and culminating in the virulently anti-communist activities led by Senator Joe McCarthy in the 1950s. Also discusses the aftermath of the McCarthy era.

Grade 8 Up-This introduction to the anti-communist movement in the United States in the 1940s and '50s focuses primarily on Joseph McCarthy, giving biographical information about his early life and his rise to power. The infamous hearings into alleged communist activities in the U.S. that his Senate subcommittee carried out are fully explained. Zeinert details the divisive effects of these hearings on our political system as well as the deleterious effects they had on the individuals accused. Some brief, but needed, general historical background about communism is included so that readers can better understand the context in which McCarthy's attacks took place. The author is objective in her analysis of McCarthy, but does not hesitate to point out examples of when his actions were unconstitutional or illegal. Primary-source documents and black-and-white photos appear throughout the text. This book will be useful for reports on this and related topics, although those seeking in-depth information will need to consult other sources. Suggestions for further reading, including relevant Internet sites, will aid researchers.
William C. Schadt, Glacier Park Middle School, Maple Valley, WA
Copyright 1998 Reed Business Information, Inc.

1. McCarthy and the Fear of Communism in American History Zeinert, Karen