Items related to Gold Rush: How to Collect, Invest and Profit With Gold...

Sieber, Arlyn Gold Rush: How to Collect, Invest and Profit With Gold Coins

Gold Rush: How to Collect, Invest and Profit With Gold Coins 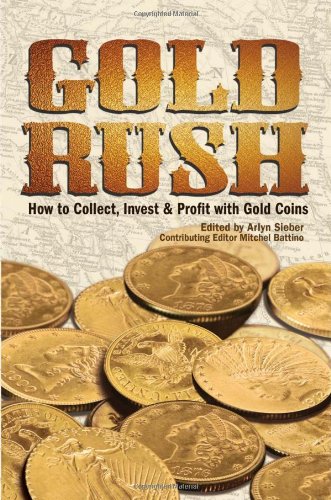 Few words evoke the dreams of the pioneer spirit and westward expansion of North America in both the mid-1800s with California, and the late 1890s with the Alaska and Yukon claims.

Gold has been a symbol of value throughout history. This volume of Gold Rush! A new book byAryln Sieber and Mitchell Battino brings into focus the coins, which are commonly available to collectors and investors, as gold needs to be considered from an investment perspective too.

Prior to World War I, most national economies were on a gold standard. Gold coins circulated, and the national paper money issues were backed by gold reserves in either coin or bullion. Since that time, economies began to change, and since World War II, gold coins have become a novelty. In the late 1960s, bullion coins began to be minted, and by the early 1980s, several countries - Austria, Australia, China, Canada, Great Britain, South Africa and the United States were striking coins of a high purity, a nominal face value, and in a traditional coin design rather than ingot form.

So, the authors present listings culled from the seminal work on modern coinage of the world, Krause Publications'Standard Catalog of World Coins. Presented in an easy to follow format profuse with illustrations, one could choose the various ways to collect, either by commemorative, circulating or bullion issues.

About the Author:
Arlyn Sieber is an experienced and accomplished numismatic writer and researcher. Mitchell A. Battino is an experienced world coin dealer from New York, specializing in gold. He provides a unique insight into the ultra active gold trading market.