Items related to Greek Coins and Their Values. Volume 2: Asia and Africa... 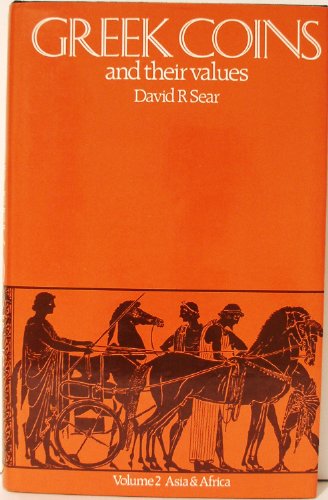 The second volume of this catalog deals with the issues of mints in Asia Minor (including the islands and Cyprus), Syria, Phoenicia, Palestine (including Jewish coins of the Hasmonaean dynasty), Arabia, Mesopotamia, and other regions of the East, Egypt, Cyrenaica, and other regions of North Africa (including Carthage); also covered are the coinages of the Hellenistic Monarchies (Macedon, Thrace, Seleucids of Syria, Ptolemies of Egypt, Pergamum, Pontus, Bithynia, Cappadocia, Armenia, Parthia, Bactria and Indo-Greeks). The primary arrangement is geographical (clockwise around the Mediterranean basin) and the listings for Asia Minor are divided between Archaic issues (before circa 480 BC) and Classical and Hellenistic (later 5th century down to 1st century BC). Includes 11 maps, a table of ancient alphabets, 4560 coin types catalogued with valuations, and almost 2000 photographic illustrations.

David Sear is among the most notable numismatic authors writing today; his seminal texts have become the standard handbooks for collectors of ancient Greek, Roman and Byzantine coinage. This guide is intended as an approachable and informative introduction to the hobby, and is a must for anyone interested in the history of the ancient Greek world.

7. Greek Coins and Their Values (Volume II Asia and Africa)