Items related to Midian, Moab and Edom: The History and Archaeology...

Midian, Moab and Edom: The History and Archaeology of Late Bronze and Iron Age Jordan and North-West Arabia (Journal for the Study of the Old Testament, Supplement Series, No. 24)

Midian, Moab and Edom: The History and Archaeology of Late Bronze and Iron Age Jordan and North-West Arabia (Journal for the Study of the Old Testament, Supplement Series, No. 24) 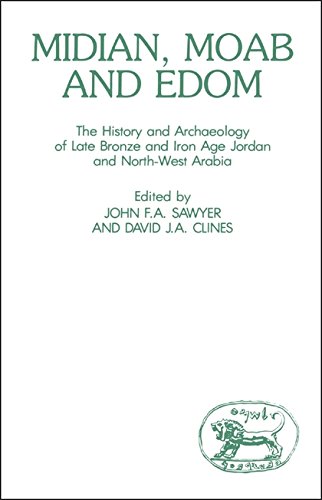 This book consists of papers delivered at a Colloquium held at the University of London Institute of Archaeology on 3-4 April 1981 attended by approximately fifty scholars, from America, Europe and the Near East, as well as from Britain. The papers reflected admirably the wide range of approaches - textual, linguistic, archaeological, anthropological, technological - which modern research has adopted towards investigating the archaeological problems concerned with this early period of history in East Jordan and North-West Arabia. This Colloquium was an offshoot of a larger gathering, the International Conference on the Archaeology of Jordan held in Oxford in March 1980. At that Conference a theme which recurred in a number of papers was that of the situation in East Jordan at that crucial period at the end of the 2nd millennium BC and the beginning of the 1st - the terminal Late Bronze Age and the initial Iron Age - when, in neighboring Palestine and Syria, and in countries further afield as well, great changes were taking place in the political, economic and demographic scene. Touched on were the Midianites of the Old Testament and their probable connection with the Arabian trade routes. Not among the best known of ancient Near Eastern peoples, the Midianites were, however, of more than passing interest in this scenario. Research on the Midianites and related groups such as the Edomites has grown in recent years; and in the course of informal discussions during the Oxford Conference, the idea was born of another, smaller, colloquium at which some of the recent work relating to this topic could be considered in greater detail. This book is a compilation of those presentations. [From the Preface by Peter J. Parr]