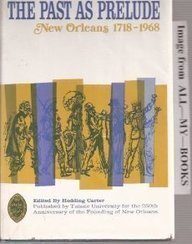 The Crescent City's rich traditions and present-day vivacity can be traced to the manner of its founding. Adventurers and settlers from France, England, Spain, Africa, the Netherlands, and the surrounding American states flocked to the city, producing an environment abundant in heart and creative spirit. Diverse races and nationalities complemented each other as communities flourished. Following the patterns of development in the city from 1718 through the first 250 years of its existence, fourteen components in this topical history examine everything that continues to make New Orleans unique: music, art, sports, and of course the people. Faculty and staff members from New Orleans' Tulane University compiled these essays to record the history an American treasure.

A mesh of cultures, religions, and customs, New Orleans began as the country's first melting pot. In honor of the city's 250th anniversary, Tulane University gathered experts on various aspects of the popular metropolis to compile a volume of essays outlining its history. Each contribution pursues one vital feature of the Crescent City, from its sordid politics to its flamboyant celebrations. The resulting topical history traces fourteen components from the city's 1718 beginnings to 1968 and provides a multifaceted view of New Orleans' development.
The heterogeneous nature of New Orleans is a result of its settlement. Rather than pilgrims and puritans, the land was claimed by French adventurers, who were soon joined by Spanish, English, Dutch, African, and American settlers. Louisiana reflects the diverse settlement patterns in its laws, architecture, art, and education system.
The vivacity of these peoples, handed down through the generations, continues to touch the community as a whole. Since its founding, New Orleans has upheld its reputation as a creative spirit with its art, music, and literature, and as a good-time town with a strong sporting history and a world-famous celebration of Mardi Gras. Even with the insight of centuries, the city remains an essence that cannot be fully explained by history but will continue to impact its inhabitants well into the future.