Items related to Revenge of the Red Raiders: The Illustrated History...

Evans, Don L. Revenge of the Red Raiders: The Illustrated History of the 22nd Bombardment Group during World War II

Revenge of the Red Raiders: The Illustrated History of the 22nd Bombardment Group during World War II 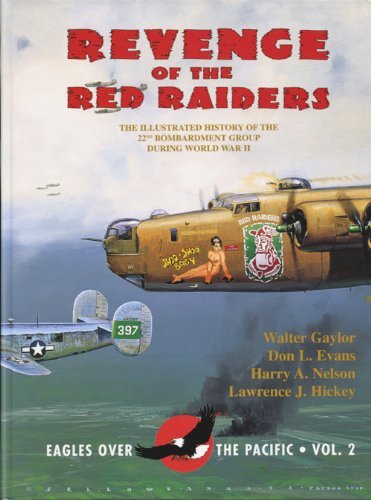 Revenge of the Red Raiders takes the reader on an unforgettable journey with WWII U.S. Army airmen across the Southwest Pacific. This comprehensively researched account follows the 22nd Bomb Group from its prewar training all the way to the end of the conflict on the island of Okinawa. The 22nd was the first Bomb Group to receive the experimental B-26 Marauder medium bomber in 1941, and their struggle to test the aircraft is detailed in this text. The first Bomb Group to fully deploy to the Pacific post-Pearl Harbor, the 22nd pioneered the flight route to Australia, and two of its planes attacked the carrier Akagi in the Battle of Midway. In April of 1942, the airmen were thrown into battle against Japanese forces threatening to overrun the Allies in the Pacific, flying some of the earliest raids on the Japanese airfield at Lae and the bastion of Rabaul from primitive bases in New Guinea. These missions are fully covered with text and photos from both sides. The 22nd later began converting to the B-25 Mitchell before becoming a B-24 Liberator Heavy Group in 1944 and continuing the fight to the very doorstep of Japan. The 22nd was the only Army Air Force unit to sink an enemy cruiser during the war. Revenge of the Red Raiders contains 624 pages and is illustrated by more than 1000 black and white or color photos, four magnificent color paintings by top aviation artist Jack Fellows, 48 full-color aircraft profiles, 3 aircraft cutaway drawings and 16 maps that pinpoint all bases, missions flown and aircraft lost. The text includes appendices of leaders, casualties, histories of every combat aircraft flown and of the unit's aircraft markings and insignias. A final appendix details the histories of the 48 B-26, B-25 and B-24 aircraft illustrated in the color profiles. The information in this text was confirmed by American and Japanese sources, providing an accurate account of virtually all of the 22nd's combat encounters in the air and against shipping at sea.