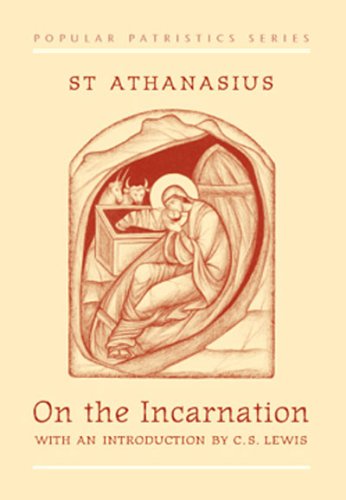 "This is a good translation of a very great book.

"St Athanasius stood contra mundum for the Trinitarian doctrine 'whole and undefiled,' when it looked as if all the civilized world was slipping back from Christianity into the religion of Arius, into one of those 'sensible' synthetic religions which are so strongly recommended today and which then, as now, included among their devotees many highly cultivated clergymen. The glory of St Athanasius is that he did not move with the times; it is his reward that he now remains when those times, like all others, have passed away.

"When I first opened De Incarnatione I soon discovered by a very simple test that I was reading a masterpiece, for only a mastermind could have written so deeply on such a subject with such classical simplicity"

- C. S. Lewis, from the Introduction

On the Incarnation is part of the POPULAR PATRISTIC SERIES.

ATHANASIUS, Bishop of Alexandria and one of the most illustrious defenders of the Christian faith, was born at Alexandria about the year 297. Before the outbreak of the Arian controversy, which began in 319, Athanasius had made himself known as the author of two essays addressed to a convert from heathenism, one of them entitled Against the Gentiles, and the other On the Incarnation of the Word. Both are of the nature of apologetical treatises, arguing such questions as monotheism, and the necessity of divine interposition for the salvation of the world; and already in the second may be traced that tone of thought respecting the essential divinity of Christ as the "God-man" for which he afterwards became conspicuous.