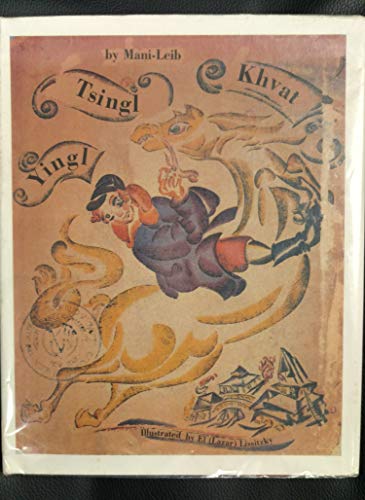 Yingl Tsingl, chafing from an endless autumn that is ruining his village, manages to bring welcome winter to it.

Book Description Hardcover. Lissitzky, El (Lazar) (illustrator). Library binding. 32 p. Mani Leib (born Mani Leib Brahinsky, 20 December 1883, Nezhin, Russian Empire 4 October 1953, New York) was a Yiddish-language poet. He emigrated to the United States at the age of 22 and settled in New York City in 1906. He published his poems in Yiddish newspapers like The Jewish Daily Forward. Writing in the cadences of ordinary speech, he formed a group of poets called Di Yunge ("the Young"). According to the Jewish Virtual Library, Leib's "sound poems drew renewed attention to the Yiddish language through their skillful use of alliteration and repetition." These poems proved controversial, and were parodied by Moyshe-Leyb Halpern in 1910; the two, it is argued, became rivals. Mani Leib also wrote about children. His classic, Yingl Tsingl Khvat, was illustrated by the Russian avant-garde master, El Lissitzky. His reputation continued to grow after his death, when his collected work was published. Good. No dust jacket. Cover has some wear and soiling. First edition. First printing thus [stated]. Seller Inventory # 71290