Items related to The Paper Bag Princess (Munsch for Kids) 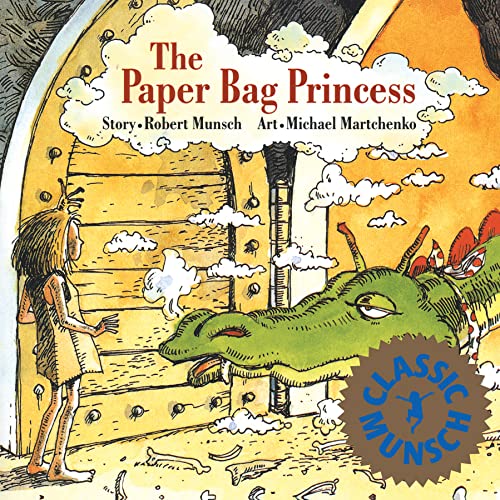 This bestselling modern classic features a princess who rescues a very snooty—and ungrateful—prince.

Review:
Elizabeth, a beautiful princess, lives in a castle and wears fancy clothes. Just when she is about to marry Prince Ronald, a dragon smashes her castle, burns her clothes with his fiery breath, and prince-naps her dear Ronald. Undaunted and presumably unclad, she dons a large paper bag and sets off to find the dragon and her cherished prince. Once she's tracked down the rascally reptile, she flatters him into performing all sorts of dragonly stunts that eventually exhaust him, allowing her to rescue Prince Ronald. But what does Prince Not-So-Charming say when he sees her? "You smell like ashes, your hair is all tangled and you are wearing a dirty old paper bag. Come back when you are dressed like a real princess." (At least he has the courtesy not to mention that the princess's crown resembles a dying sea anemone.) In any case, let's just say that Princess Elizabeth and Prince Ronald do not, under any circumstances, live happily ever after. Canadian author Robert Munsch celebrates feisty females everywhere with this popular favorite, and Michael Martchenko's scratchy, comical, pen-and-ink drawings capture the tongue-in-cheek quality of this read-aloud crowd pleaser. (Ages 4 to 8) --Karin Snelson
About the Author:

Robert Munsch was born in Pittsburgh, Pennsylvania. He studied to be a Jesuit priest, but decided to work with children instead. He taught in a variety of nursery schools and daycare centers while he earned an M.A. in Early Childhood Education. In 1975, Munsch and his wife, Ann, moved to Guelph, Ontario. The Munschs have three children: Julie, Andrew and Tyya (see them all in Something Good!).

Michael Martchenko has illustrated over 30 books for children and has exhibited his work throughout North America. He has won numerous awards for design and illustration. He lives with his wife, Patricia, in Toronto.