Items related to The Yeast Connection Cookbook: A Guide to Good Nutrition...

The Yeast Connection Cookbook: A Guide to Good Nutrition and Better Health 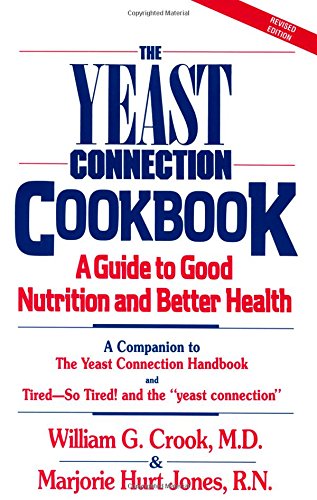 This book offers authoritative information on foods that promote good health for everyone, including those who do not have a yeast problem. In addition to 225 family and kitchen-tested recipes, this book discusses food contaminants and provides suggestions for obtaining safe foods. It also gives detailed instructions for detecting and overcoming food allergies.

Marjorie Hurt Jones, RN, received her BS in biology from Illinois Wesleyan University in Bloomington, Illinois, and her nursing education at the Northwestern Memorial Hospital in Chicago, Illinois.

Yeast is not a household word, but it should be because it affects so many people. Our practice of taking antibiotics for colds and flu that are caused by viruses and not bacteria and our diets loaded with sugar and refined carbohydrates have made yeast a permanent resident in our bodies.

Having some yeast in our intestines is normal, but when antibiotics destroy the “good” bacteria that normally keep yeast in check, overgrowth begins. Yeast attack and poke holes in the intestinal lining leading to a condition called “leaky gut.” Through those holes and into the bloodstream escape 180 different toxic yeast by-products as well as bacterial toxins, and incompletely digested food molecules. Sugar plays an insidious role in this process because it is yeast's favorite food and when it is present in the diet, it makes yeast grow out of control. The Yeast Connection Cookbook gives you tools to help get sugar out of your diet.

I didn't learn about yeast overgrowth until my naturopathic training in the early 1980's after I graduated from medical school. In medicine I was only taught that yeast was either a pesky vaginitis or a life-threatening blood infection in hospitalized patients on numerous IV antibiotics. Dr. William Crook was one of the pioneers in the field and in my naturopathic training I learned about his work and began treating yeast in the early 1980's.

In 1986, because I was known as the local expert on treating yeast, I had the honor of being a guest with Dr. Crook on a television talk show called “Speaking Out with Harry Brown” in Toronto. During our ninety-minute program the station's phone lines were flooded with calls. They tabulated 80,000 people trying to reach the show to ask about yeast. In the aftermath, the station received countless requests for transcripts from the public, doctors, and hospital clinics. Dr. Crook and his emphasis on yeast had really struck a chord.

I've even begun to call Dr. Crook's type of yeast Crook's Candidiasis to differentiate it from the medical definition of yeast as a vaginitis or a blood infection.

1. Yeast in the intestines that overgrow and change from a budding state to an invasive state under the influence of antibiotics, birth control pills, cortisone, and a refined sugar diet causing intestinal inflammation and leaky gut syndrome including symptoms of IBS;

2. Allergic reactions to yeast that cause burning and itching of various parts of the body including nasal membranes, sinuses, skin, and vagina;

3. Multiple and sometimes severe reactions in the body to the almost 180 yeast toxic by-products and waste products, either by direct toxic reactions or allergic reactions to these yeast by-products as they pass into the bloodstream due to leaky gut.

4. Body-wide allergic reactions and toxic reactions to undigested food molecules, bacterial toxins, and parasitic toxins that pass into the bloodstream due to leaky gut.

I never forgot my meeting with Dr. Crook. His generosity and caring were palpable and his legacy is contained in books such as the Yeast Connection Cookbook and The Yeast Connection Handbook which are modern-day classics. The basis of treating yeast and keeping it under control is diet. There is no drug nor will there ever be a drug that eliminates yeast or that deals with the massive toxic reactions that you see in Crook's Candidiasis.

The key to getting yeast under control is to follow a diet that starves yeast by not feeding them sugar and other foods that they crave. That's why this book is so important and vital to your success with a yeast program. And if you repopulate your gut with beneficial organisms called probiotics found in organic yogurt (with no added sugar) or probiotic capsules you will do even better. You can learn about the six-step yeast-fighting plan at www.yeastconnection.com.

Since I began treating yeast there have been many breakthroughs in diet and supplements that make your battle with yeast much easier. In health-food stores and large supermarkets you can find numerous wheat-free products; a natural sweetener called Stevia; non-dairy milks―soy, almond, rice; chemical-free cleaning products and cosmetics. At yeastconnection.com there are natural supplements that treat vaginitis and yeast overgrowth. Yeastconnection.com also offers an invaluable series of teleconferences on yeast and wellness that make it much easier for you to begin your yeast-fighting journey and to find support on your way.

I'm honored to be the medical advisor to yeastconnection.com and work with Dr. Crook's daughter, Elizabeth Crook, as we continue his valuable work.

1. The Yeast Connection Cookbook: A Guide to Good Nutrition and Better Health

2. The Yeast Connection Cookbook: A Guide to Good Nutrition and Better Health

3. The Yeast Connection Cookbook: A Guide to Good Nutrition and Better Health

4. The Yeast Connection Cookbook: A Guide to Good Nutrition and Better Health

Book Description Condition: New. Book is slightly bent out of shape, otherwise NEW. Quality Books. Because We Care - Shipped from Canada. Usually ships within 1-2 business days. If you buy this book from us, we will donate a book to a local school. We donate 10,000+ books to local schools every year. Seller Inventory # R13575C

7. THE YEAST CONNECTION COOKBOOK: A