Items related to The Mystery of the Seven Vowels: In Theory and Practice

Godwin, Joscelyn The Mystery of the Seven Vowels: In Theory and Practice

The Mystery of the Seven Vowels: In Theory and Practice 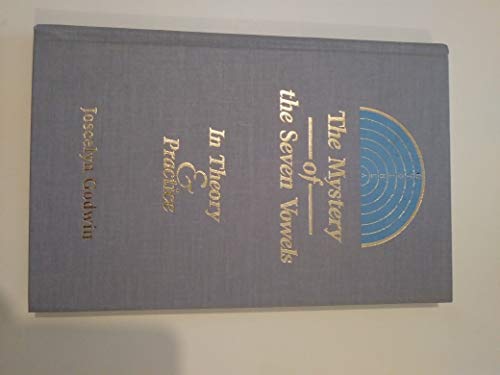 The seven vowels, which we use every day in speech, are truly mysterious things. Analysis shows that vowels depend on the phenomenon of harmonics, which is at the very basis of music, while our sensitivity to them proves that the human ear is naturally attuned to harmony. When we hear vowels, we are hearing the laws of harmony, which are ultimately the laws of number that are said the govern the universe. There is also an esoteric tradition that links the vowels to the seven plants of astrology and the gods that rule them. The mythological background includes such topics as the vowel-names of IAO, IAHWE, and other gods; the invocations of planets used in Egyptian temples and in Greek magical incantations; the power of wordless song to illuminate and heal, and even--if the reports of occultists are true--to aid the soul after it has left the body. This is the first book on the subject ever to appear in English, and it is unusual in bringing together a number of fields not usually connected: linguistics, harmony, musicology, mythology, the history of religions, esoteric and occult philosophy, vocal exercises and meditational practices. The author discusses systems relating the vowels to planets, tones and colors; he writes of ancient and modern vowel-songs, the names of the gods, and the use of vowels in Gnosticism and ancient magic. The treatment is scholarly, but the book is also practical, giving a number of different paths for discovering one's own tones through the vowels, and exploring their power to center, to uplift, and to heal.

Joscelyn Godwin was born in Kelmscott, Oxfordshire, England on January 16, 1945. He was educated as a chorister at Christ Church Cathedral School, Oxford, then at Radley College (Music Scholar), and Magdalene College, Cambridge (Music Scholar; B.A., 1965, Mus. B., 1966, M.A. 1969). Coming to the USA in 1966, he did graduate work in Musicology at Cornell University (Ph. D., 1969; dissertation: "The Music of Henry Cowell") and taught at Cleveland State University for two years before joining the Colgate University Music Department in 1971. He has taught at Colgate ever since.

1. The Mystery of the Seven Vowels: In Theory and Practice

2. The Mystery of the Seven Vowels in Theory and Practice.

Book Description Phanes Press, Grand Rapids, MI, 1991. First Edition. Hardcover. Octavo. 110pp. Original pale blue cloth lettered in gilt and illustrated in blue and gilt on upper board. Endnotes, bibliography. A study into the magical and mystical significance of vowels, from their connection with harmonics, to their links with the seven planets of astrology and their ruling deities, to their use in Divine names like IAO and IAHWE and magical incantations. As new - thus in Fine condition (no dust jacket issued). Original publisher's advertising insert included. Seller Inventory # 63255

3. The Mystery of the Seven Vowels: In Theory and Practice