Items related to Bulimia: A Guide to Recovery

Bulimia: A Guide to Recovery 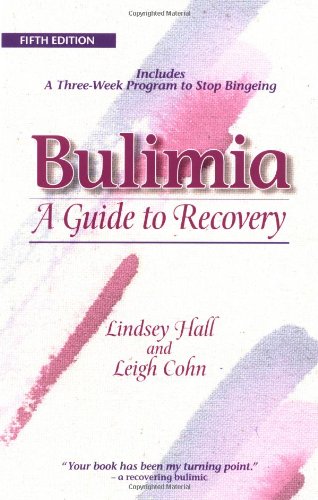 ...answers common questions about bulimia...also provides stories and insights from recovered and recovering bulimics, including the author's own experiences.

Lindsey Hall and Leigh Cohn, who are married, are internationally respected authors of several books on eating disorders and recovery topics. Their original self-help guide was the first book ever published on bulimia, and Lindsey was the first "recovered bulimic" to appear on national television. Both have lectured extensively and have served as officers of non-profit associations. Some of their books have been translated into French, Spanish, Italian, Japanese, Chinese, and other languages.

For nine years, I binged and vomited up to five times daily. Although there were a few days without a binge, the thoughts were always there, even in my dreams. It was painful and frightening. No one knew about my bulimia, because I kept it safely hidden behind a facade of competence, happiness, and average body weight. When my health and marriage began to fail, however, a series of coincidences brought me face to face with recovery, and I soon became devoted to freeing myself from my obsession with food.
I worked hard and willingly, and underwent an amazing transformation. As the bulimic thoughts and behavior subsided, I was able to see how it had served me all those years. It was an effective tool for emotional, physical, and spiritual survival when I knew no other. It had been a friend, a lover, a hiding place, a voice, a quest for meaning and love. It was a way to cope with growing up in a frightening and uncertain world. But what had started as an innocent diet became a monster which threatened to devour my entire life. . .

1. Bulimia: A Guide to Recovery

2. Bulimia: A Guide to Recovery

3. Bulimia: A Guide to Recovery Lindsey Hall and Leigh Cohn

4. Bulimia: A Guide to Recovery Lindsey Hall and Leigh Cohn