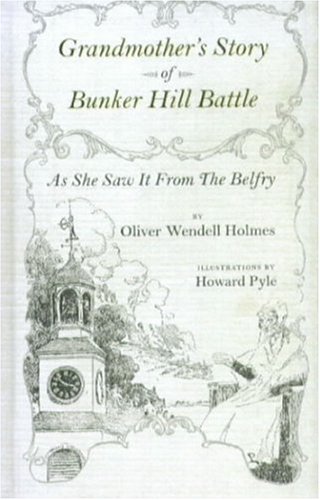 Oliver Wendell Holmes, Poet Laureate of Boston, wrote this poem in 1875 as part of the Centenary celebration of the Battle of Bunker Hill.
Two months after Lexington and Concord, American forces seized some high ground in Charleston, threatening the British fleet and Boston, itself.Within hours the British retaliated.While the battle of June 17, 1775 was brief (the colonials ran out of ammunition and had to retreat) it was a very costly victory for the British Army, and it confirmed that the skirmishes of April 19th had heralded a true revolution.
Howard Pyle, artist, illustrator and author of many books,was noted for his ability to capture the American spirit in his works.

Oliver Wendell Holmes, Jr. (1841-1935) served as chief justice of the Massachusetts Supreme Court and as an associate justice of the U.S. Supreme Court. He was nick-named the "Great Dissenter" because of his many dissenting opinions. Holmes is also the author of Kent's Commentaries on the Law (1873) and "The Path of the Law" (1897).