Items related to The 12th Planet (Book I) (Earth Chronicles) 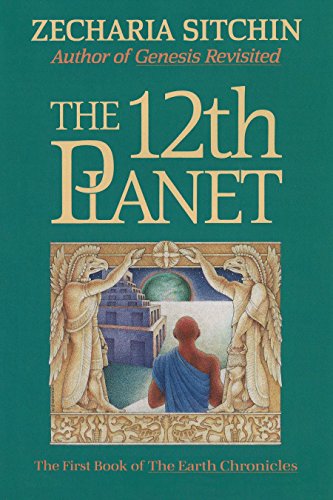 Over the years, startling evidence has been unearthed, challenging established notions of the origins of Earth and life on it and suggesting the existence of a superior race of beings who once inhabited our world. The product of thirty years of intensive research, The 12th Planet is the first book in Zecharia Sitchin's prophetic Earth Chronicles series--a revolutionary body of work that offers indisputable documentary proof of humanity's extraterrestrial forefathers. Travelers from the stars, they arrived eons ago, and planted the genetic seed that would ultimately blossom into a remarkable species...called Man.

The 12th Planet brings to life the Sumerian civilization, presenting millennia-old evidence of the existence of Nibiru, the home planet of the Anunnaki and of the landings of the Anunnaki on Earth every 3,600 years, and reveals a complete history of the solar system as told by these early visitors from another planet.

Zecharia Sitchin's Earth Chronicles series, with millions of copies sold worldwide, deal with the history and prehistory of Earth and humankind. Each book in the series is based upon information written on clay tablets by the ancient civilizations of the Near East. The series is offered here, for the first time, in highly readable, hardbound collector's editions with enhanced maps and diagrams.

Zecharia Sitchen's The 12th Planet is the starting point on a quest that spans six books and 20 years worth of ancient aliens, genetic manipulation, and scrutiny of linguistic minutiae. If we trust Sitchen's translation abilities, we must be prepared for the imminent return of an alien race who created us some 300,0x00 years ago. The 12th Planet is perhaps the best written of Sitchin's Earth Chronicles series; full of example after example of ancient Sumerian passages, astronomical observations, archaeological finds, and technological coincidences supporting his theories. The price we pay for all this evidence is a bit of a dry read at times, but the ideas Sitchin proposes are more than scintillating enough to make up for the overtly scholastic tone of his text. --Brian Patterson

Zecharia Sitchin (1920-2010) was born in Russia and grew up in Palestine, where he acquired a profound knowledge of modern and ancient Hebrew, other Semitic and European languages, the Old Testament, and the history and archaeology of the Near East. A graduate of the University of London with a degree in economic history, he worked as a journalist and editor for many years prior to undertaking his life’s work--The Earth Chronicles.

One of the few scholars able to read the clay tablets and interpret ancient Sumerian and Akkadian, Sitchin based The Earth Chronicles series on the texts and pictorial evidence recorded by the ancient civilizations of the Near East. His books have been widely translated, reprinted in paperback editions, converted to Braille for the blind, and featured on radio and television programs.

The 12th Planet (Book I) (Hardback or Cased Book)