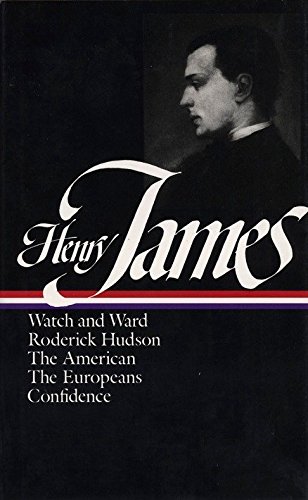 Here is an immensely engaging introduction to one of the great novelists of our own or any country, the first volume in the Library of America edition of Henry James's complete works.

James’s first novel, Watch and Ward (1871), written when he was only 28, is a Pygmalion-type story in which a proper Bostonian gentleman grows to love and eventually marry the much younger woman whose guardian he is.

Roderick Hudson (1875) is a novel about a headstrong and proud young American sculptor of generous native talent who loses his way among the entanglements and temptations of Italy.

The American (1877) was written in Paris and is filled with scenes of Parisian life, the expatriate culture of American tourists, and the closed and protective world behind the barriers of old families and traditions.

In The Europeans (1878) a pristine, conservative, 1830s New England village is invaded by two visiting cousins, brother and sister, from the European branch of one of the town’s leading families.

Confidence (1880), a little-known and charming novel of American expatriates traveling through the great cities and watering-places of Europe, is a light drawing-room comedy about the romantic entanglements among two old friends and the two very different women they encounter.

The Library of America is an award-winning, nonprofit program dedicated to publishing America's best and most significant writing in handsome, enduring volumes, featuring authoritative texts. Hailed as "the most important book-publishing project is the nation's history" (Newsweek), this acclaimed series is restoring America's literary heritage in "the finest-looking, longest-lasting edition ever made" (New Republic).

William T. Stafford (1924–1991), volume editor, was a professor of English at Purdue University, a founder and editor of the journal Modern Fiction Studies, and the author of numerous studies of James’s novels, plays, and criticism.