George A. Thompson Faded Footprints: The Lost Rhoades Gold Mines & Other Hidden Treasures of the Uintas

Faded Footprints: The Lost Rhoades Gold Mines & Other Hidden Treasures of the Uintas 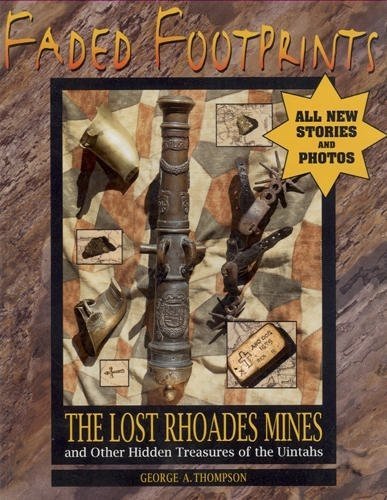 New edition of George Thompson's classic work on Utah's most famous lost gold mine: The Lost Rhoades Mine. Mormon Gold? Lost Spanish Gold? Sacred Indian Gold? Fairy tale or myth, Thomas and Caleb Rhoades, Brigham Young, Chief Walkara and others all play a role in this retelling of the granddaddy of all of Utah's lost mines and treasures. Illustrated with b&w historical photographs on nearly every page along with 19 treasure maps and diagrams. The famous treasure hunter Mel Fisher even came to the Uinta Mountains with George Thompson to search for the lost Rhoades treasure. Learn all the stories of old Mormon gold allegedly mined by Thomas and Caleb Rhoades for the benefit of Brigham Young and the Mormons; the secrets of the Carre-Shin-Ob or the lost gold mine of the Ute Indians and their famed leader Chief Walkara; and all the numerous tales of Spanish gold and treasure buried somewhere in the Uintas. George Thompson reveals secrets of these lost mines that other writers never disclosed. Long out of print and highly sought after, Faded Footprints has been regularly selling online for $100 a copy and up! This is your chance to order an affordable edition.

1. Faded Footprints: The Lost Rhoades Gold Mines & Other Hidden Treasures of the Uintas

2. Faded Footprints: The Lost Rhoades Gold Mines & Other Hidden Treasures of the Uintas