Items related to Men in petticoats: A selection of letters from Victorian...

Farrer, Peter (Editor) Men in petticoats: A selection of letters from Victorian newspapers

Men in petticoats: A selection of letters from Victorian newspapers 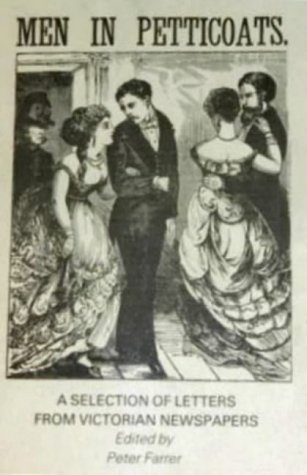 This volume contains extracts culled from long-defunct publications, most of them from male readers extolling the virtues of tight lacing, boasting of their slim waists and the comfort they derive from the support provided. Many others go further, saying how much they enjoy wearing women's clothes and high-heeled boots and shoes. The terms "cross dressing" and "transvestite" were not known at the time and the general attitude seems to have been one of mild surprise without any sort of condemnation. These ideas of dress were not apparently confined to this country; other letters tell of young male "ballerinas" in France and America who were greatly admired (by women especially) and, in fact, were not only made much of but treated as darlings of society. The 17 photographs of graceful young ladies date from the mid-1860s and amongst them may be found the famous Ernest Boulton and Frederick Park. Their arrest and eventual acquittal were a "cause celebre" for Victorian England. They were involved in amateur theatricals, sometimes arranged for charitable purposes, which were extremely popular with the young men in society, who organized the productions solely, it would appear, for the pleasure of playing the ladies' parts.

Men in Petticoats: A Selection of of Letters from Victorian Newspapers

Shipping: US$ 11.73
From United Kingdom to U.S.A.
Destination, rates & speeds

MEN IN PETTICOATS: A SELECTION OF LETTERS FROM VICTORIAN NEWSPAPERS.

Shipping: US$ 18.52
From United Kingdom to U.S.A.
Destination, rates & speeds