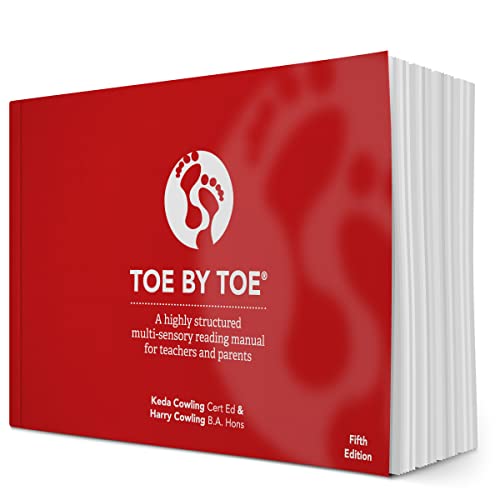 Having tried lots of other ways to help my severely dyslexic but very intelligent oldest son, aged 8, I had almost given up. Having four young children my time is limited and so many other systems seemed to ask the impossible - and to blame you as a parent if you were simply unable to provide the sort of help that really only parents of only children can! This system is different. Yes, you do need a few minutes of peace a day, but even I can do that. There is no huge barrier to overcome - it starts with the letters of the alphabet and moves on not step by step but as it says toe by toe. After three weeks on the system my son gained nearly six months in reading age and better still he looked forward to doing his exercises each day. I showed him the end of the book and explained that reading that was where we were going to get to - together, toe-by-toe. He wantes to make it and he can see that he can do it - little by little. Now we are two months in - we haven't reassessed his reading age but he read a whole page of Harry Potter to himself recently, just like his friends do. Nine weeks ago he couldn't read the word 'dam' or 'set'. He seems six inches taller almost! This has a lot to do with the fact that the book also implicitly boosts self confidence - there are no huge gaps to fill, and the exercises are each only minutely more advanced than the previous one so there is a good deal of familiar territory mixed in with the new things. I simply have no criticisms for this book. As far as I am concerned this book is IT for dyslexia. Buy it and use it!Ha

Book Description K & H Cowling, United Kingdom, 1993. Paperback. Condition: New. Language: English. Brand new Book. Toe By Toe is a small red book designed for anyone who finds reading difficult. This includes weak readers who struggle to decode or those with dyslexic difficulties.Keda Cowling chose the name Toe By Toe to signify that students make progress by the tiniest steps one toe at a time. However, even though the steps taken are small, students can clearly measure progress right from the first page. Confidence and self-esteem are boosted as a result.Over 25 years of fieldwork went into the development of the system and it is this research that makes the method so easy to use. You don t have to be trained in any field of education to coach with Toe By Toe. In fact, the manual often works better with non-professionals as they do not come to the task with any pre-conceived notions and thus simply follow the very detailed instructions to the letter.The unique syllable division employed by Toe By Toe is very easy to use. Once the sound of a phoneme has been taught using the polynons (nonsense words), these rules can then be applied to any multi-syllabic word and students find a whole new world of reading opening before their eyes.Regardless of the nature of students literacy problems, they can be taught to read using Toe By Toe. The severity of their problems may only be reflected in the length of time needed to get through the book. The rapid improvement in reading age is truly astonishing. Seller Inventory # AAZ9780952256403

7. Toe by Toe: A Highly Structured Multi-sensory Reading Manual for Teachers and Parents

8. Toe by Toe: A Highly Structured Multi-sensory Reading Manual for Teachers and Parents