Items related to Serial Port Complete: Programming and Circuits for...

Serial Port Complete: Programming and Circuits for Rs-232 and Rs-485 Links and Networks 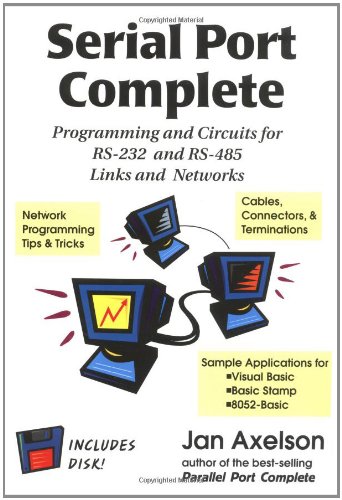 Explains how to design, program, and install RS-232 and RS-485 links and networks, covering topics including protocols, port architecture, and MSComm.

Some low-power circuits that connect to an RS-232 port don't need an external power supply. Instead, they draw all the power they need from the interface itself.

The power comes from unused outputs. To meet the standard, an RS-232 driver's output must be at least 5V with a 3,000-ohm load. From this, we can use Ohm's law to deduce that each output can source at least 1.6 milliampere at 5V. In practice, most RS-232 outputs exceed the minimum, but staying within the specification will ensure that a circuit will work on any port.

Using Signals as a Power Source

Figure 6-7 shows ways of using RS-232 outputs as a power source. When in the On state, RTS and DTR are between +5 and +15V. To set the signals to On in Visual Basic, set MSComm's RTSEnable and DTREnable properties to True.

Figure 6-7A shows a simple unregulated output. When an output is positive, it can serve as a positive voltage source. To double the output current, tie two lines together as shown, with a 1N5819 Schottky diode in each line. This prevents current from feeding back into the interface if the voltages differ. You can use any rectifier diodes, but Schottkys have a lower forward voltage than other silicon diodes.

You can even use the TD line as a power source by setting the Break signal, but of course this prevents you from using the line for data. However, this technique might be useful if you're using the port as a synchronous interface, using handshaking lines for the clock and data.

Adding a high-efficiency regulator results in a steady output voltage with little wasted power. Figure 6-7B shows a regulated 5V output using the MAX667 low-dropout, linear regulator. The input can be as high as 18V, and it needs to be just 10 millivolts greater than the output, so it will work with most ports. The regulator's quiescent current is under 100 microamperes with a load of several milliamperes.

For a circuit that will work even if the RS-232 output drops below 5V, use the MAX770, which is a switching regulator that has a 5V output with an input between 2V and 16V. The '770 requires several external components, including an inductor and output transistor. If you need only one or a few supplies, Maxim has an inexpensive evaluation kit containing a PC board with all of the components installed.

Another option for port power is to use a lower regulated voltage, either by connecting voltage-divider resistors between Vout, Set, and Gnd as described in the MAX667's data sheet, or by using a regulator with a lower fixed output such as the 3V MAX689.

Because you can count on getting at most a few milliamperes from the port, use care in choosing components that will use port power. Use the lowest-power components you can find, and use a 3V supply if possible.

1. Serial Port Complete: Programming and Circuits for Rs-232 and Rs-485 Links and Networks

2. Serial Port Complete: Programming and Circuits for Rs-232 and Rs-485 Links and Networks