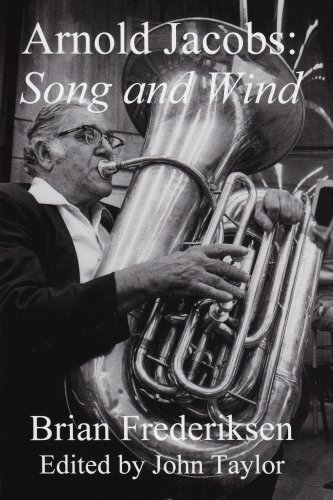 With a career spanning seven decades with the Indianapolis, Pittsburgh and Chicago Symphonies, Arnold Jacobs has earned a reputation as a world-class performer. Equally significant are his teachings. During his career, thousands of students have passed through his studio. Finally, there is the definitive book on his career. Arnold Jacobs: Song and Wind is written by Mr. Jacobs' assistant, Brian Frederiksen, and edited by John Taylor. With a length of 296 pages, material comes from masterclasses, private interviews, previously published writings and contributions from his students and colleagues.

Song and Wind
Excerpted from Arnold Jacobs: Song and Wind*
By Brian Frederiksen
One of Jacobs' most famous phrases is Song and Wind. During his lecture at the 1995 International Brassfest in Bloomington, Indiana, he explained:

"My approach to music is expressed as Song and Wind. This is very important to communicate a musical message to the audience.

"This approach is one of simplicity as the structure and function of the human being is very complex, but we function in a simple manner. When we bring it to the art form it becomes very simple.

"Song, to me, involves about 85 percent of the intellectual concentration of playing an instrument, based on what you want the audience to hear.

"You cannot get anywhere without wind. If you think of a car, the wheels will not turn without an energy source--the engine. Brass players must have a source of energy as there must be a vibrating column of air for the instrument to amplify and resonate. The musical engine is the vibration of the lips. However, the lips cannot vibrate without wind.

"When we combine Song and Wind, the musical message, song, is the principal element comprising 85 percent of the consciousness. The remaining 15 percent is the application of the breath, wind, to fuel the vibration of the lips."

Adolph Herseth puts it another way, "You have to start with a very precise sense of how something should sound. Then, instinctively, you modify your lip and your breathing and the pressure of the horn to obtain that sound."

Wind is the energy source used to fuel the conceptual message of the song from the brain. His emphasis of Song and Wind shows how much importance Jacobs gives to musical conception. "Study the product, not the method. Mentalize music by making statements, not by asking questions."

Brian Frederiksen was born into a family of flute players as his mother and aunt were the flute section of the Albany (NY) Symphony. Eventually, he began playing the tuba when eleven years old. He he graduated from the Interlochen Arts Academy, the American Conservatory in Chicago (BM), and Northwestern University (MM).

During his studies in Chicago beginning in 1973, he started a long relationship with Arnold Jacobs. Besides being the legendary tubist of the Chicago Symphony (1944-1988), Jacobs was the teacher recognized as the expert on breathing for wind instruments.

During twenty-five years with Mr. Jacobs, Mr. Frederiksen was a student and then his assistant with masterclasses, first at Northwestern University and then throughout the country. He wrote Arnold Jacobs: Song and Wind, and formed WindSong Press Ltd. carrying books, CDs, music and breathing devices. After Mr. Jacobs passed away, he worked with the Jacobs family to preserve the Jacobs legacy for future research by creating the Arnold and Gizella Jacobs Collection. windsongpress.com was created as the web s most complete source about Arnold Jacobs.

Mark Nelson - TUBA Journal, Winter, 1997
Printed in its entirety with permission of Mark Nelson.
Arnold Jacobs is one of the true legendary teachers and performers of all time. That he also plays the tuba makes that fact all more the sweet. Brian Frederiksen spent several years gathering material from Jacobs' masterclasses, previously published writings and contributions from his students and colleagues as well as interviewing Jacobs, himself, to write this definitive book on the master's career from the earliest days as a boy in the Los Angeles area through his appearance at the 1995 Tuba/Euphonium Conference at Northwestern University. John Taylor has done a masterful job putting the copious amount of material into readable form and Frederiksen also has generously devoted five entire pages to personnel who helped provide information and source material for this book.

In addition to a detailed and exhaustive biography, this book also contains a plethora of material not only exhaustively detailing virtually every aspect of Jacobs' teaching but also a seemingly inexhaustible supply of information associated with him. Information such as a list of every brass player who ever played in the Chicago Symphony and a listing of every recording Arnold Jacobs made either with a symphony or as a soloist or chamber musician help put his astonishing career into perspective. An entire chapter is devoted to York tubas, another to Jacobs' studio through the years, and another to biographies of all the conductors of the Chicago Symphony including major guest conductors. There is even a sub-chapter on every renovation Chicago's Orchestra Hall received during Jacobs' tenure. The lists and detailed information go on and on. Frederiksen has not only managed to capture the essence of one of the greatest musicians to influence generations of brass performers, but he also provided a truly meaningful historical perspective and backdrop to Jacobs' career.

Another facet of this book that is most gratifying to this reviewer is the careful research and documentation of the information Frederiksen was able to collect. The author providing over 20 pages of end notes, each referenced with the exact primary source consulted. The bibliography alone is eight pages long. A name and a subject index are included for easy reference to a particular person or topic in the book.

Other appealing aspects of this book include a very generous allocation of space for pictures of Jacobs, his wife, his colleagues and friends, tubas, teaching equipment, as well as many medical illustrations to help visualize his teaching. Graphs, charts, and diagrams are also used to illustrate points Jacobs makes about particular facets of his teaching.

What can this book do for the student and brass teacher? The chapters on Jacobs' teaching philosophy and the physical and mental elements of performance are a blend of the best available information on his teaching. Most of us who have ever taken a private lesson have been influenced to some degree by Arnold Jacobs. In this book, however, all the pieces are put into place in a fashion not available anywhere else. If there is perhaps one aspect of this book that is not stellar to this reader, it is that sometimes the information is so detailed, not only in the teaching chapters but throughout the book, that it is very easy to lose sight of the point of discussion. I found myself rereading chapters several times to gain new insight into the man and teacher. As a tribute to one of our most respected colleagues, it represents a synthesis of the best we all aspire to. I know I will be reading out of this book for the rest of my life for myself and for my students. --TUBA Journal

Douglas Hill
Excerpts from Journal of the International Horn Society, February 1997
This book is full of anecdotal praise for all of the accomplishments and the vast influences rendered by Mr. Jacobs, perhaps to an extreme. One does not need to overly justify the importance of such a book as this.

It is the extensive and useful materials within the chapters titled: Teacher, Physical Elements, Mental Elements, Performance, and part of the chapter on Instruments that I wish to recommend for all horn players and teachers. Through a thorough study of these nearly eighty pages of brilliant, insightful, helpful, and well-written lessons, we all can learn new ways to do what we need to do both physiologically and philosophically as performers, or at least new ways to say it as teachers. This book compiles the most important philosophical principles, basic tenets, and quotes of Arnold Jacobs. That fact alone should explain why these chapters should be required reading. --International Horn Society

Arnold Jacobs: Song and Wind by Brian Frederiksen, is clearly a labor of love. In 1974, the author began studying with Arnold Jacobs, and the result was a lifetime of devotion to his mentor. The frailty of the octogenarian master led the student to take on the task of chronicling Jacobs' personal and professional evolution.

Overall, the substance of the book reflects a studious yet personalized analysis of an extensive compilation of information. Included are quotes from Jacobs, a discography, and a listing of brass personnel in various ensembles with which Jacobs was associated. Other researchers will benefit from the extensive references.

Structurally, the book proceeds in chronological fashion, describing Jacobs' early development, years at the Curtis Institute, performing stints with various ensembles, and retirement. Also included are brief essays on others, such as conductors. The latter half of the book delves into Jacobs' views on teaching, the physical and mental aspects of performance, instruments, and the favored York tuba. Descriptions of his studios and the various devices (e.g., breath builder, incentive spirometer, oscilloscope) that he used for teaching and developing performance ability add to the detail of the text.

One positive aspect of the book is that it is unquestionably authoritative. The author provides countless details that allow the reader to acquire considerable knowledge about Arnold Jacobs. The countless details may, however, also be seen as a negative. The minutiae about other people and situations sometimes have doubtful usefulness, even to historians. There is also some problem with transition and continuity, resulting in a somewhat choppy flow. The material is otherwise well edited.

Arnold Jacobs leaves a valuable musical legacy. Despite its shortcomings, Arnold Jacobs: Song and Wind is an important source for all musicians, particularly those who play brass instruments. --International Trumpet Guild Journal,