Items related to A History of the American People

Paul Johnson A History of the American People

A History of the American People 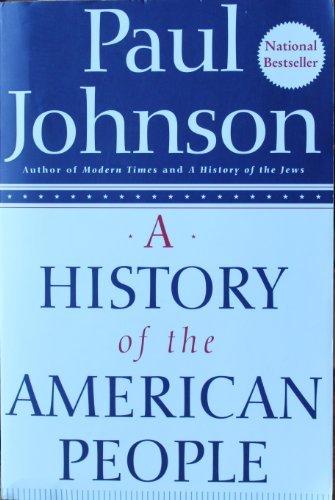 Paul Johnson, whose previous works include the distinguished Modern Times and A History of the Jews, has produced an epic that spans the history of the American people over the past 400 years. The prolific narrative covers every aspect of U.S. history, from science, customs, religion, and politics to the individual men and women who have helped shape the nation. His detailed, provocative examinations of political and social icons, from Lyndon Johnson to Norman Rockwell, are especially strong. Johnson's text is intelligent and rich with detail, and yet extremely accessible for anyone interested in a reinterpretive analysis of America's past.

What makes this book unique is Johnson's approach to this self-professed Herculean task. The prevalent tone throughout is optimism. Whether he's discussing race relations, industrialization, the history of women, immigrants, Vietnam, or political correctness, Johnson--a staunch conservative who was born, bred, and educated in England--is openly enamored with America's past, particularly the hardships and tribulations that the nation has had to overcome. He sees this story as a series of important lessons, not just for Americans but for the whole of mankind as well. At a time when other contemporary scholars find it easier to bemoan the past, Johnson offers the reader "a compelling antidote to those who regard the future with pessimism."

"The creation of the United States of America is the greatest of all human adventures," begins Paul Johnson's remarkable new American history. "No other national story holds such tremendous lessons, for the American people themselves and for the rest of mankind." Johnson's history is a reinterpretation of American history from the first settlements to the Clinton administration. It covers every aspect of U.S. history--politics; business and economics; art, literature and science; society and customs; complex traditions and religious beliefs. The story is told in terms of the men and women who shaped and led the nation and the ordinary people who collectively created its unique character. Wherever possible, letters, diaries, and recorded conversations are used to ensure a sense of actuality. "The book has new and often trenchant things to say about every aspect and period of America's past," says Johnson, "and I do not seek, as some historians do, to conceal my opinions."

Johnson's history presents John Winthrop, Roger Williams, Anne Hutchinson, Cotton Mather, Franklin, Tom Paine, Washington, Adams, Jefferson, Hamilton, and Madison from a fresh perspective. It emphasizes the role of religion in American history and how early America was linked to England's history and culture and includes incisive portraits of Andrew Jackson, Chief Justice Marshall, Clay, Lincoln, and Jefferson Davis. Johnson shows how Grover Cleveland and Teddy Roosevelt ushered in the age of big business and industry and how Woodrow Wilson revolutionized the government's role. He offers new views of Harding, Coolidge, and Hoover and of Franklin Roosevelt's New Deal and his role as commander in chief during World War II. An examination of the unforeseen greatness of Harry Truman and reassessments of Eisenhower, Kennedy, Johnson, Nixon, Reagan, and Bush follow. "Compulsively readable," said Foreign Affairs of Johnson's unique narrative skills and sharp profiles of people.

This is an in-depth portrait of a great people, from their fragile origins through their struggles for independence and nationhood, their heroic efforts and sacrifices to deal with the `organic sin' of slavery and the preservation of the Union to its explosive economic growth and emergence as a world power and its sole superpower. Johnson discusses such contemporary topics as the politics of racism, education, Vietnam, the power of the press, political correctness, the growth of litigation, and the rising influence of women. He sees Americans as a problem-solving people and the story of America as "essentially one of difficulties being overcome by intelligence and skill, by faith and strength of purpose, by courage and persistence...Looking back on its past, and forward to its future, the auguries are that it will not disappoint humanity."

This challenging narrative and interpretation of American history by the author of many distinguished historical works is sometimes controversial and always provocative. Johnson's views of individuals, events, themes, and issues are original, critical, and admiring, for he is, above all, a strong believer in the history and the destiny of the American people.

1. A History of the American People