Items related to How to DNA Test Our Family Relationships

How to DNA Test Our Family Relationships 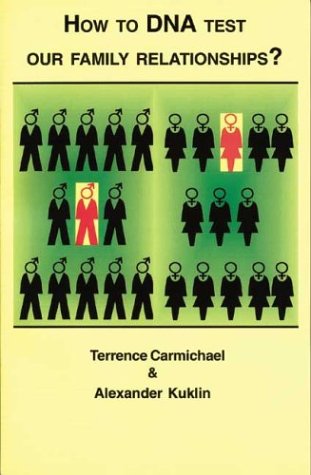 How to DNA test your family relationships is a condensed and informative guide to molecular biology techniques used in studying biological relations with close and distant family members. You may have heard of mitochondrial Eve and nuclear adam. Now read about how to test DNA and answer questions of your true historic identity, ethnicity, religion, and even geographical origin.

Terrence Carmichael is the CEO of GeneTree, Inc. He has been involved in the business of paternity and distant family relationships for many years. Alexander Kuklin is the director for global marketing at the biotechnololgy company Transgenomic, Inc.

from the Preface to the book: The progress of the Human Genome Project caused an explosion of renewed interest in using DNA technology to study people’s ancestry. Scientific discoveries pointing to Africa as the recent birthplace of modern humans used DNA, passed exclusively in a maternal line by the mitochondria, the energy producing organelles in the cell. Researchers traced this DNA to a mitochondrial Eve. To test the theory, scientists studied the Y chromosome, which is passed from father to son. This provided an independent test of the mitochondrial Eve hypothesis. Scientists found the genetic trail leading to Adam, and it pointed to the same time and place where mitochondrial Eve lived.

Services based on DNA technology, which are still being refined in research laboratories, are in great demand by consumers who are eager to read the genetic book of their ancestors and find their true origins. The avalanche of information and speed of delivery available through the Internet, coupled with guaranteed anonymity and privacy offered by e-commerce genetic companies, allows those interested to easily order such tests on-line.

This book is a short reference guide for the use of DNA technology in testing family relationships. Its objective is to outline the procedures involved in DNA testing. Each topic mentioned here is a scientific discipline by itself. The authors do not cherish the ambition to describe all possible details and discoveries in this field. Our aim is to spark interest in the reader for further studies and discussions.

1. How to DNA Test Our Family Relationships

2. How to DNA Test Our Family Relationships