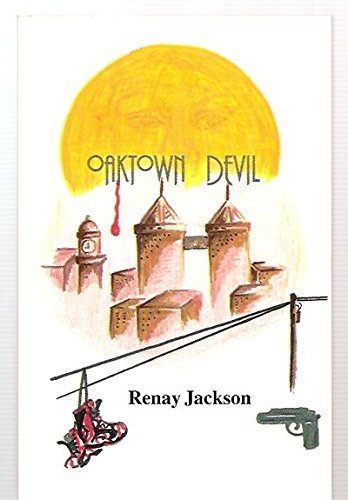 On the streets, crime and violence are part of the daily routine, and revenge has taken the place of stickball. Staying straight isn't easy, especially when one's family is mixed up in gang wars and drug dealing. When Rainbow Jordan's brother Stoney is murdered, he's determined to find the killer—both to avenge his brother's death and prove his own innocence in the murders that follow. Renay Jackson tells his characters' stories in the voices of the streets: the drug lords and their victims; desperate young men and women whose only goal is a better lifestyle and more money despite the consequences; and those who are simply victims of a system that's held them down their whole lives. More than just a page-turner, Oaktown Devil speaks for readers outside the mainstream and offers a voice for an overlooked population.

Renay Jackson is a former rapper and street lit author with five novels to his credit, all of which will be published by Frog, Ltd. Over a two-year period. Jackson received the Chester Himes Black Mystery Writer Award in 2002. A single father to three daughters and a niece, he lives in Oakland, California, where he has been a custodian for the Oakland Police Department for more than fifteen years.

"There has never been a substitute for originality. Renay Jackson serves up a generous, innovative dose of it in the first of his series of crime novels, Oaktown Devil. The story plays out on the streets of Oakland in California's underbelly, where drug trafficking, violence, and double crosses are a way of life. This powerfully framed tale of what has recently been termed 'hip hop literature' is the zenith of the art form."
- Robert Greer, best-selling author of The CJ Floyd Mysteries and Heat Shock

Book Description Paperback. Condition: Very Good. Book has light shelving wear to the edges and corners, along with light rubbing to the covers. A possible author's signature rests on the title page. Aside from the items listed this is a very good copy that remains well-bound with bright pages that are crisp and unmarked. Seller Inventory # 940140

Book Description Trade Paperback. Condition: Very Good. Later Printing. [Oakland]: [LaDay Publishing] [2002]. Very Good. 2002. Later Printing. Trade Paperback. 0967147239 . Later [2nd] printing. "Deals with Armageddon, the battle of good versus evil, depending on which side you choose. The author depicts the reality of ghetto life and takes the reader to the seediest, roughtest, and most deadliest parts of town". 204 pages. Fine copy with a "WITHDRAWN" inkstamp to the first page [although no other markings are evident]. . Seller Inventory # 48336