Ghosts of the ETO: American Tactical Deception Units in the European Theater, 1944 - 1945 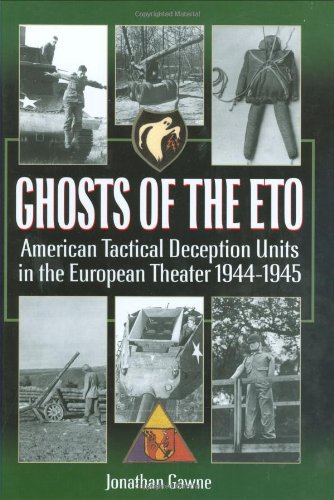 No history of the war in Europe has ever taken into account the actions of the men of the US 23rd Special Troops. These men took part in over 22 deception operations against the German Army. Some of these operations had tremendous impact upon how the battles in Europe were fought. The men who participated in these actions were sworn to secrecy for 50 years, and are only now willing to talk about their role.

The 23rd was composed of four main units. A signal deception unit to broadcast fake radio signals, an engineer camouflage unit to set up rubber dummies of tanks and trucks, a combat engineer unit to construct emplacements and provide local security, and a sonic deception company. The sonic unit was developed to fool German listening posts by playing audio recordings of various sounds, such as tanks moving up or bridges being built.

The 23rd was the only tactical deception unit of the American Army in World War ll combining all aspects of deception. This book also covers the birthplace of sonic deception: the Army Experimental Station at Pine Camp; and their smaller sister unit, the 3133rd Sonic Deception company that saw action for 14 days in Italy.

Jonathan Gawne is a leading military historian and is the author of the best selling Spearheading D Day and The US Army Photo Album (both published by Histoire & Collections and available from Casemate) as well as books in the Greenhill Books “GI Series”. He has contributed articles to numerous military magazines. He lives in Framingham, MA.

Jon Gawne is considered one of the leading experts on the history of American Army uniforms and equipment in both world wars. His numerous articles for Militaria Magazine have covered everything from the shortage of winter clothing during the Battle of the Bulge to the history of dog tags. His writings have been translated into many languages, including French, Italian and Czech, and are equally popular in both Europe and the US. He has been a technical consultant for films and museums. He lives in Massachusetts with his wife and a small spoiled dog, in a house overrun with books, documents and military memorabilia.

"... provides the reader with an informed and informative look at the 23rd Special Troops, who fought the German army at the end of World War II using deception as an effective military tactic. Telling the compelling story of courageous and cunning soldiers through declassified memos and the testimony of survivors, Ghosts Of The Eto is highly recommended reading as being a simply fascinating military history of a hidden aspect of World War II that would have a profound and lasting influence on military strategy and tactics." (Midwest Book Review)

"The ghosts of the European theater in World War II were members of the 23d Headquarters Special Troops who worked to deceive the Germans on the battlefield. Numbering about 75 officers and 950 enlisted men, mainly Engineer and Signal Corps soldiers, attached to the 12th Army Group, the 23d, starting early in July 1944, carried out twenty-two operations during the course of the campaigns. Each assignment receives a chapter in Jonathan Gawne's account...Jonathan Gawne, so far as I know, is the first to describe in detail the work of this tactical deception unit. He also narrates its origin, training, and postwar history." (Martin Blumenson Journal of Military History)

"An excellent, balanced history of the 23rd Special Troops. Gawne tells the story like it was -- warts and all. I say this because I was there as commander of the 406th Engineer Combat Company...there is reason to believe that GHOSTS OF THE ETO may be one of the most important books to come out of World War II. It should be read by all officers from the highest to lowest rank and by all noncommissioned officers." (Engineer Magazine)

“This book offers a previously untold aspect of war in the European Theatre, that of the actions of the me of the US 23rd Special Troops, who took part in over 22 deception operations against the Germans, some of which had a tremendous impact on how battles in Europe were fought at that time”
“The 192-page book features numerous black and white photos, maps and illustrations that lifts the lid on this fascinating aspect of the Second World War” (Military Machines International)

"...a welcome addition to the history of the US Army's combat experience in Europe in World War II and deception warfare in particular." (The Journal of America’s Military Past)

"Ghosts of ETO remains a good read not only for the operations of the “23rd HQ” and their influence on the war but also for throwing light on the unit’s inner workings and methodology, as well as on the lives of the men who served in it, some of whom went on to considerable fame in theatre, film or design." (StrategyPage)

3. GHOSTS OF THE ETO: AMERICAN TACT