Items related to Home In One Piece

Home In One Piece 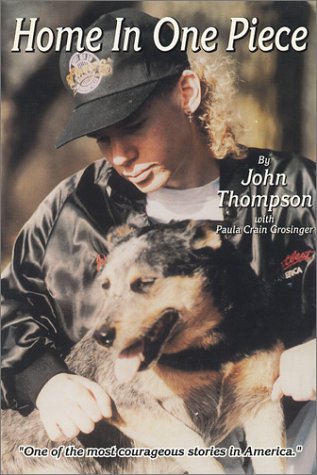 While working alone on his parent's farm one January morning in 1992, eighteen year old John Thompson became entangled in a piece of machinery. In an instant, both arms were ripped from his body and he was knocked unconscious. Not knowing if he would survive his injuries, John get off the ground, staggered over 100 yards to the house, and opened a door with his mouth. Once in the house he grasped a pen in his teeth to punch numbers on the phone and call for help. He then went to the bathroom, climbed in the bathtub so he wouldn't bleed on his mother's new carpets, and waited for help to arrive.

John Thompson endeared himself to millions of Americans in the wake of his frightening farm accident in 1992. Sought after by talk shows and featured at major sporting events, John became a spokesman for blood donation and a role model for young and old, in his busy coast to coast schedule of appearances. His co-author, Paula Grosinger, is a media consultant and much published writer. Both live in North Dakota.

"It's an inspirational story of hope and endurance." -- Joan Lunden

"John Thompson's book is a portrait of courage. A book of astonishing candor and intimate revelation." -- Victoria Principal

"The courage John has shown is the stuff of which the world's greatest heroes have been made." -- George Sinner, Former Governor of ND

1. Home In One Piece

2. Home In One Piece

3. Home In One Piece