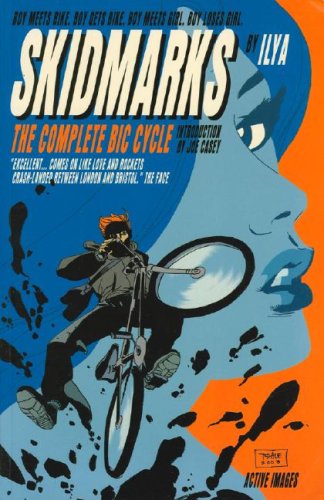 Available for the first time in trade paperback, SKIDMARKS was originally issued as a three issue series by TUNDRA UK, and has been collected with extra material by Active Images. Described by publisher Richard Starkings as "KES for bicycle enthusiasts," or (for those of you who don't share his love for obscure British movies from the sixties) "LOVE AND ROCKETS meets Fish'n'Chips," SKIDMARKS is a kitchen sink drama revolving around the life and loves of Bic.

Readers who like LOVE AND ROCKETS, ALEC or STRANGERS IN PARADISE will get a kick out of SKIDMARKS.

Excellent... comes on like Love and Rockets crash-landed between London and Bristol. --The Face magazine

Ilya's tale represents a very convincing portrayal of the ambitions of youth, and it is highly recommended for anyone seeking a fun, smart, incredible ride. --Tim Hartnett, SilverBulletComicBooks.com