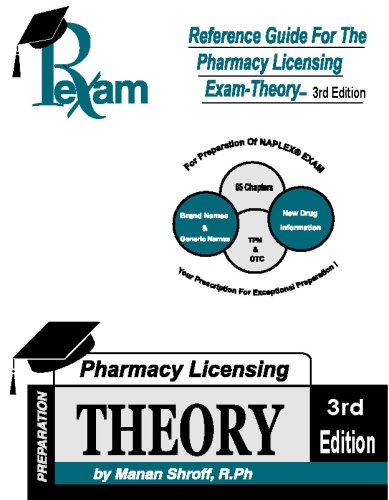 Over 65 chapters review the basics of pharmacology. Well organized therapeutic classifications of drugs at the beginning of each chapter. Brand and generic names of medications highly utilized in the U.S. Updated information on newly available drugs. Brief review on over-the-counter drugs & TPN. Antidotes of medications, normal therapeutic serum concentrations of drugs and much more in easy to read tables.

My name is Manan Shroff. I am currently registered pharmacist in usa.

Elevation of serum transaminase level would be associated with Lovenox therapy. Since elevation of AST is a very important factor for diagnosis of myocardial infarction, liver disease and pulmonary embolism, result should be interpreted with caution. 134(c)Lozol (Indapamide) is antihypertensive drug with diuretic activity. It is available in 1.25 mg and 2.5 mg of oral strengths. It may cause hypokalemia by increasing the excreation of K+. It should be avoided in patient suffering from hypokalemia. 135(c) Tussionex Pennkinetic contains Hydrocodone and Chlorpheniramine polistirex as the active ingredients. Hydrocodone is included in formula as a cough suppressant & Chlorpheniramine is a anti histamine agent. 136(c)Patch should be placed on clean, dry area of skin or trunk of the body. Site selected should not be exposed to sunlight. It should never be applied to breast. The application site should be rotated every week. The patch should not be applied to waistline since tight clothing may rub-off the system. System should be applied immediately after opening. 137(a)The various salts of Theophylline has various % of Theophylline.

Book Description Krishna Publications Inc. Condition: Acceptable. Paperback The item is fairly worn but still readable. Signs of wear include aesthetic issues such as scratches, worn covers, damaged binding. The item may have identifying markings on it or show other signs of previous use. May have page creases, creased spine, bent cover or markings inside. Packed with care, shipped promptly. Seller Inventory # 2FF-03-0319