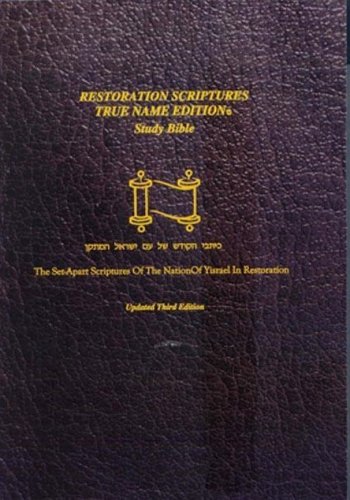 Book Description Why Now? The Restoration Scriptures True Name Edition Study Bible has been in the heart of Father YHWH from the very dawn of His covenant with Jacob/Yaakov. YHWH being in control of all things knew Yisrael’s entire future – including our exile, dispersion and regathering through the Moshiach. The Moshiach has come, and we are the result of His faithful mission, the return of all the believing exiles of all 12 tribes, both physically and spiritually. Meeting The Need In order to meet the needs of this growing remnant community, The Father ordained the vision for this edition around the year 2000 CE. We did not act upon the vision at that time for many reasons. One being that the task was so monumental and daunting for us, due to the fact that we would have to self-publish any such "two-house Scriptures." However, after the strong and increasing frequency of the prompting by the Set-Apart Spirit, we decided that we could no longer postpone YHWH’s will. He desired a translation that would edify and confirm the renewed Yisraelite heritage and identity of many believers in the Moshiach Yahshua, who desired to live out their lifestyle as part of the true Commonwealth of Yisrael. Once we decided to obey our Father's orders, the world’s first two-house true Name Bible has now become a wonderful living reality. Underlying Text To publish the unique Restoration Scriptures True Name Edition Study Bible, we used the Masoretic Text as our foundational text for the First Covenant Tanach. We then proceeded to correct obvious anti-Yahshua redactions, shamefully tampered with by the Masoretic editors. Moreover, we reinserted the true Name back into this foundational source. For the Renewed Covenant, we have used many greatly appreciated and widely accepted sources. After prayerful consideration and scholarship, we have used key sources such as the Aramaic Peshitta, which we believe to be the actual autographs, holding to the strong view of Aramaic primacy, The Matthew Shem Tov, The Dead Sea Scrolls, The Septuagint, along with consulting many other legitimate later Greek sources. Most of the sources were Semitic, since we believe the Renewed Covenant was inspired in the Semitic languages of Aramaic and Hebrew. This unique "one of kind" Bible, will be one of your most treasured possessions. Rabbi Moshe Yoseph Koniuchowsky General Editor/Publisher The Restoration Scriptures True Name Edition Study Bible 3nd Updated Edition North Miami Beach, Florida April 2006